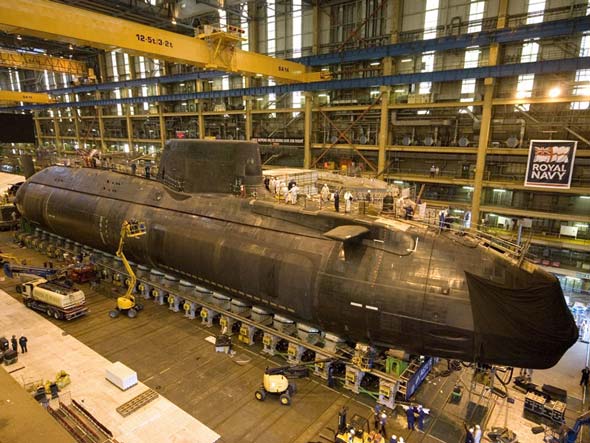 Far bigger and more potent than the current class submarines, the 7,400 tons, 100 meter long sub weighs about 2,000 more than the current Trafalgar class submarines. Astute is expected to begin sea trials in March 2008, and is expected to enter service with the Royal Navy in 2009. It will be based in Scotland. Astute is the first vessel of four in the Astute class. The other three are AMBUSH, ARTFUL and AUDACIOUS.

The nuclear reactor and 4 turbines on board Astute are capable of generating tens of megawatts of power, yet less than a single watt of power is radiated into the sea. Once deployed, Astute is designed not to require refuelling throughout her full service life – over 25 years – and can patrol for 90 days, remaining undetected thousands of miles from home and hundreds of metres underwater. The submarine will be equipped with 38 missiles and torpedoes comprising tomahawk missiles, and Spearfish heavyweight torpedoes. It is fitted with an electro-optical system replacing the traditional periscope. Astute will be operated by 98 seamen, 17 less than the Trafalgar class crew. The Astute, the first sub of this class was launched on June 8, 2007 by HRH The Duchess of Cornwall at the BAE Systems shipyard in Barrow in Furness, Cumbria. Astute is the first nuclear attack submarine to be launched in the UK for almost a decade. The photos on this page show the Astute prepared for the official launching at the BAE Shipyard. Also shown is the fore section, showing three torpedo launchers and the distinctive forward sloped nose. with propulsion elements visible. The and aft section at the bottom indicates some details of the propulsion elements.