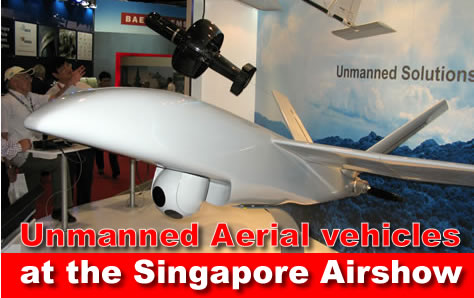 ST Aero unveiled at the 2008 Singapore Airshow a number of new UAVs, including the vertical take-off and landing Fantail 5000, the Skyblade III electrically powered hand-launched mini-UAV, and Skyblade IV tactical small UAV capable to fly missions for up to 12 hours.

ST Aero displayed here a number of UAVs, including the vertical take-off and landing “Fantail 5000”, a 6.5 kg variant of the Fantail family of VTOL UAVs capable of operating at a range of 8 km and a maximum speed of 90 knots. This UAV can hover continuously for about 30 minutes. It represents a significant growth compared to the earlier Fantail 3000 version, which was quite limited by weather and wind conditions.

Another UAV developed in Singapore is ST Aero’s Skyblade III, a five kg vehicle following the general outline of the Elbit System’s Skylark I design (although Elbit denied any part in the Singaporean program). Launched by hand and supported by two soldiers, Skyblade III can operate at latitudes between 300 and 1,500 ft. All avionics, sensors, communications and the power source are contained in a large pod suspended below the tube-shaped fuselage.

Another member of ST Aero’s Skyblade family is the Skyblade IV, a V tail shaped 2 meter long tactical UAV with a wing span of 3.5 meters, this vehicle weighs 50kg on takeoff and carries up to 12 kg of usable payload. It can climb up to 15,000 ft flying a mission of 12 hours. The range of 100 km is limited mostly by line-of-sight communications. Skyblade IV will be equipped with an EO/IR payload. This UAV is expected to fly in 2009.

The Singapore Air Force is the lead operator of UAVs in the island city state. The air forces’ UAV command operates three squadrons, flying IAI/Malat Searcher, Heron and Elbit Systems/Hermes 450. The Singapore Army is expected to be the lead service for the smaller UAVs. Singapore is planning to field mini-UAVs as part of its land forces modernization but has not yet decided on which system to procure.

Following the induction of Hermes 450 into service with the Singapore Air Force; UAV wing, Elbit Systems introduced improved versions of its Hermes family, including Hermes 900, Hermes 450B and a modified version of the Hermes 450 fitted with a new engine, contributing to much improved payload capacity. The Hermes 900 was displayed in a full scale, 15 m’ wing span model representing the latest addition to the Hermes family of UAVs. The prototype is expected to fly this year. Haim Kellerman, general manager of Elbit Systems UAV activities, told Defense Update that the new Hermes will fully integrate with current Hermes 450 systems, offering users to extend their capabilities and assume more challenging missions, with longer endurance, and heavier payloads (the ‘900 will have a gross takeoff weight of 970 kg, carrying up to 300 kg of payloads). It is designed for all-weather operations it will use fully redundant, fault-tolerant avionics, and will be powered by fully-certified Rotax engine. The aircraft will be equipped with reconnaissance and surveillance payloads such as EO and SAR, communications intelligence or electronic signal intelligence collection systems etc. Over short and medium range missions, the system maintains secure, redundant line-of-sight (LOS) datalink as well as redundant satellite communications when employed on long range missions, beyond line of sight (BLOS).

Hermes 450, the workhorse of the Israel Air Force UAV units was proven as an instrumental asset during the War in Lebanon in 2006. A new Hermes 450 unit delivered to the British Army, supported by Thales UK was urgently dispatched to improve reconnaissance and surveillance for the coalition forces in Afghanistan and Iraq. In total, in the recent years the Hermes 450 fleet surpassed 60,000 operational hours.

At the Singapore Airshow Elbit Systems displayed two of the Hermes 450 models – the Watchkeeper platform, also known as Hermes 450B and the evolved version of the Hermes 450 recently , equipped with a new R902 utilizing a wide rotary (wankel) engine block developed by Elbit Systems. According to Kellerman, the new engines can be retrofitted to the Hermes 450 aircraft in service. The engine has fuel injection system which further improved fuel consumption, an integral electrical starter, automatic takeoff and landing and remotely controlled brakes integrated in the landing gear, improving self sufficiency at forward operation bases. The introduction of the new engine improves power/weight ration of the platform, increasing gross takeoff by 17% (470 kg to 550 kg), providing for more fuel for extended mission endurance (adding about 10 hours), without relying on external fuel.

Development of the Watchkeeper is at the final phase. Addressing the UK requirements, this robust platform was designed with dual-payload system capability as a baseline. It is also designed to operate in cold, rough weather conditions, equipped with de-icing system. Watchkeeper is designed to comply with future visual and instrument flying rules in segregated airspace and through civilian air traffic corridors, and Elbit expects it will be fully certified for such missions.