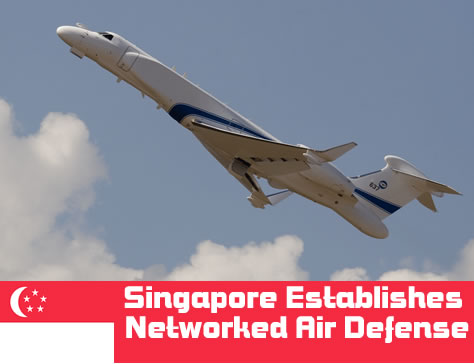 Based on the integrated capabilities of its fighters, multi-layered ground based air defense, early warning and command and control Singapore is planning to deploy a ‘Networked Air Defense” capability. To modernize and enhance its early warning and control capability Singapore is replacing its obsolete E-2C Hawkeye with four new Airborne Early Warning aircraft equipped with Israeli ELM-2085 Phased array radar (Phalcon) and SIGINT platform. The process is scheduled to span over 24 months.

In May 2007 Singapore officially confirmed its intention to buy four Gulfstream G550 special mission business jets, configured for Airborne Early Warning missions. These aircraft will replace four Northrop Grumman E-2C Hawkeye aircraft currently in service. The first aircraft is scheduled for delivery this year According to the Singapore MOD, the G550 AEW will be capable of flying 9 hours missions at an altitude of 41,000ft (12,500m). With a longer range and higher ceiling (up to 51,000 ft), compared to the Hawkeye, the G550 AEW will provide long-range detection of low-flying targets and better support long range strike fighters such as the new F-15SG.

Singapore will receive the first aircraft of this year, and all four are expected to be operational by 2010. No details were released about the electronic and radar suite to be installed in the aircraft, but, it is a known fact that the only system currently available for this platform is the Israeli IAI/Elta 2085 PHALCON radar, developed for four Israel Air Force G550 AEW aircraft known as Eitam, currently being delivered by IAI/Elta. The first aircraft was handed over by Gulfstream on September 2006.

Derivatives of this radar system are operational with the Chilean Air Force and are under final integration on IL-76 aircraft for the Indian Air Force. Israel Aerospace Industries developed the G550 AEW system as part of a broad range of special mission aircraft, based on Gulfstream’s jets. One of these is a SIGNT platform, developed by IAI’s subsidiary Elta Systems, for the Israel Air Force. For these applications Elta is offering the EL/I-3001 AISIS – Airborne Integrated SIGINT multi-role Airborne Integrated Signal Intelligence System (AISIS). The system is designed to monitor electromagnetic signals (mostly radars) and communication network environments from long-range, creating an ‘electronic order of battle’ picture of all relevant threats, providing up-to-date tactical and strategic intelligence feeding the nation’s intelligence database. AISIS can search, intercept, measure, locate, analyze, classify and monitor many types of ground, airborne and naval transmissions, characterized by short duration, variety of signal types and frequent changes in signals parameters.