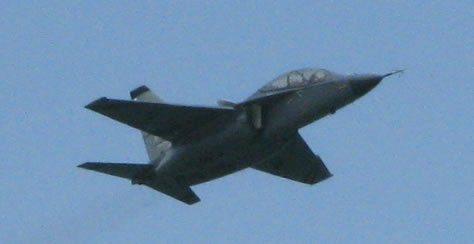 In the forthcoming years, the Singapore Air Force will be operating a formidable air force flying over 130 combat aircraft, half of which are brand new (42 F-16C/D Block 52 and 24 F-15SG). The remaining are F-16 of various types. The next big program planned for the city state is to field 8-12 advanced jet trainers (AJT) to support the new jets. Singapore is expected to announce its decision by 2009/2010. It is not clear which companies responded to the Singaporean request for information, but the daily flight displays Aermacchchi M-346 and Korean Aerospace Industries (KAI)/Lockheed Martin T-50 at the Singapore Airshow are hinting about some of the possibilities.

BAE Systems is believed to be offering the Hawk AJT. This will be the second phase of Singapore’s pilot training revolution, after Lockheed Martin was selected to operate and maintain all basic training aircraft and facilities for the Singapore Air Force. This program is truly international. The whole program will be managed by a U.S. company. The Pilatus PC-21 aircraft are built in Switzerland (the first flew for the first time last month); operations are scheduled to begin in Australia this summer. Singapore is reportedly interested in a similar Public Private Partnership (PPP) to operate the AJT and the Ministry of defense is expected to release a request for proposal for training services integration package later this year.