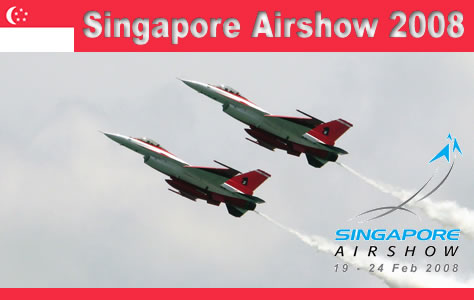 The inaugural Singapore Airshow was held from the 19 – 24 February 2008 at a brand new show site at Changi North. The new venue, coupled with a purpose-built exhibition hall, beautiful sea-front attracted over 35,000 trade visitors (90,000 guests over public days) and was well received among 800+ exhibitors from 51 countries. Backed by enthusiastic support from 59 of the world’s top 100 aerospace companies, and riding the wave of regional growth the Singapore Airshow was 40% bigger than past ‘Asian Aerospace’ airshows held in Singapore. The success of Singapore Airshow 2008 is evident from the strong show of support from exhibitors. 70% of them have already confirmed bookings for the Airshow in 2010.

Singapore Airshow 2008 also attracted the largest delegation groups with 240 government and international delegations visiting over the 4 trade days. Among the visiting aviation industry leaders were 21 airline CEOs as well as the heads of the International Air Transport Association (IATA) and the International Civil Aviation Organisation (ICAO).

The show closed on a high note with over US$13 billion in sales of aircraft and related equipment announced during show days. In addition, a further $2.6 billion was also generated from contracts for facilities and other services, demonstrating the surging growth of the region’s aviation industry at Asia’s largest-ever trade event.

While Singapore’s appetite for new fighters is seemingly satisfied, it is always on the watch to keep its aircraft updated and operationally fully capable. Singapore is also planning to enhance the strike capability of its F-16s. The Ministry of Defense and Air Force are evaluating several proposals for advanced targeting pods to be carried on the new Falcons. Lockheed Martin and Rafael are competing on the planned procurement of a third batch of targeting pods to equip Singapore’s latest F-16 Block 52 aircraft.

Both companies are already contracted to supply targeting pods to the Singapore Air Force. Lockheed Martin was selected to equip the F-15SG with the Sniper Advanced targeting Pod (ATP), the most advanced system currently fielded with U.S. Air Force’s Air Combat Command units, flying on F-15Es, F-16s, A-10s, B-1s. The Sniper is also being integrated on the B-52 aircraft. Snipers have been selected to equip recently delivered F-16s and F-18s. Singapore already operates Rafael’s Litening pods with some of its F-16s. Rafael offered a more advanced system of the Litening, providing superior resolution, longer range, and better geo-location and geo-targeting precision. Singapore also operates the Pathfinder navigation pod (AN/AAQ20) on some of the F-16s. Singapore also operates older Lantirn pods on some of its US based aircraft used for training. Trying to meet capabilities currently available with other modern fighters, Lockheed Martin is offering a retrofit of an Infra-Red Search Track capability for their F-16. This device uses the IRST developed for the JSF in a podded installation derived from the company’s Pathfinder targeting pod.

Another pod unveiled at the show was the Indian SIVA Electronic Support System, developed by the Indian Defence Avionics Research Establishment (DARE). The pod weighs 100 kg can be carried by the Su-30 aircraft on standard rocket attachment point and is interfacing with the aircraft radar warning systems and avionics. The pod covers a forward arc of 60 degrees and provides target accuracy of 1-2 RMS. The SIVA pod will enable the Indian Air Force to conduct electronic reconnaissance missions and support air defense suppression missions by providing accurate targeting for radar suppression missiles and other guided weapons.

While targeting pods were developed and are being operated as an integral element of precision airstrike, in modern asymmetric warfare, they are commonly used for intelligence collection and ad-hoc target acquisition missions known as “Non-Traditional Intelligence, Surveillance, and Reconnaissance” (NTISR). Singapore, like other modern air forces, is considering these capabilities for current and future forces. Both Sniper and Litening are already performing NTISR missions. In addition, Rafael’s tactical recce pod known as Reccelite provides high resolution imagery and more effective coverage, supperior to all targeting pods. Reccelite was used by the Israel Air Force during the recent war in Lebanon. Operational with Spanish and Dutch air forces, Reccelite is identical to the Litening in size and attachments, automatically activated on the aircraft similar to a ‘plug and play’ device. The Dutch air force operates the Reccelite pod with regular F-16s squadrons, deployed with mixed F-16 formations carrying either Litening or Reccelite pods.

Another modernization option looming for the F-16 is the SABRE (Scalable Agile Beam Radar), is a modular radar unveiled by Northrop Grumman. This AESA radar was derived partially from the AN/APG-80 developed for the F-16E Block 60 aircraft delivered to the UAE. While AN/APG-80 is already integrated on the F-16IN (offered to India) Northrop Grumman is offering SABRE as a retrofit for F-16 Block 50/52 models sold in large numbers in recent years. Since the new radar can be shaped and designed to fit in the nose of the F-16 and its power and cooling requirements are similar, Northrop Grumman considers it to be a natural choice to air forces operating the F-16, since the new radar is expected to be much superior to the current APG-68(V)9 radar. Furthermore, as the technology becomes mature, the reliability of AESA radars is expected to be significantly higher than current systems using a single high power emitter and mechanical steering. Raytheon is also offering AESA radars for new and upgraded F-15s. Singapore plans to integrate the AN/APG-63(V)3 AESA radar into the 24 F-15SG scheduled to enter production soon. Similar upgrades could take place in South Korea, particularly if Seoul decides to buy additional 60 F-15K as part of its future combat aircraft program. Other countries that could be using Raytheon’s AESA radars are India and Japan, both are considering the F/A-18E/F Super Hornet for future buys. Australia already selected the Super Hornet as an interim fighter aircraft, filling the gap until the JSF becomes operational.