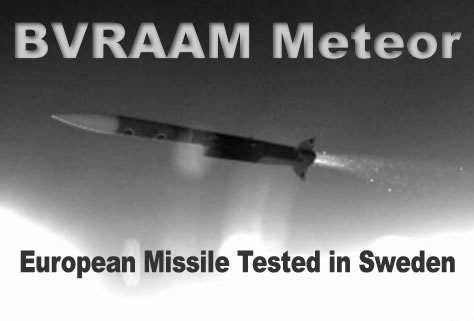 Testing of the Meteor Beyond Visual Range (BVR) Air/Air Missile (BVRAAM) developed by MBDA continue in Sweden. The recent missile test flights were conducted by Gripen fighter aircraft on 6 March, as the Meteor was fired at an MQM-107B ‘Streaker’ high-subsonic subscale aerial target at the Vidsel Missile Test Range in Sweden. This test concluded a series of development firings to prove the overall performance of the missile and its various subsystems in terms of guidance, propulsion, data link and fuse. The next phase in the program will test fully capable pre-series production missiles. These tests will commence towards the end of 2008 and will continue progressively through to the end of the development program by late 2011.

The missile was rail-launched from the Gripen flying at 0.9 Mach and at an altitude of 18,000ft (5500m). Following the boost phase, the missile successfully transitioned to its ramjet operation and accelerated to its operational speed. The seeker then acquired the target and tracked it through to intercept. During the flight the missile’s data link successfully demonstrated communication between the missile and the firing aircraft.

Meteor will be operated on Typhoon, Rafale and Gripen aircraft, with the air forces of France, Germany, Italy, Spain, Sweden and the UK. According to MBDA, Meteor has three to six times the kinematic performance of current air/air missiles of its type. The key to Meteor’s outstanding performance is throttleable ducted rocket (ramjet). Designed in Germany by Bayern Chemie, this new propulsion system allows the missile to maintain a very high speed all the way to the target, giving increased stand-off and disengagement ranges and better ability to chase and destroy highly agile maneuvering targets. Other key features of the missile include stealthy launch, and robust performance against countermeasures.

According to Dave Armstrong, MBDA’s Meteor Multinational Project Director, the program partners are expected to commit taking up their production options in the upcoming pre-production industrialization phase.