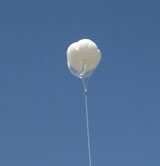 A rapidly deployable aerostat-based system designed to detect and locate mortar attacks could protect forward bases and temporary sites operated by NATO and coalition forces. The system was recently demonstrated to a symposium of the NATO programme for Defence against Mortar Attacks (DAMA) in Amsterdam.

Developed by the Dutch aerospace company Vigilance B.V. the DB-1 carries an integrated sensor array comprising an acoustic array and gyro-stabilized gimballed EO/IR camera payload. Detecting incidents of enemy fire, the acoustic sensor provides point-of-origin (POO) information to the ground control station, generating instant situational awareness to the operator. At the same time the EO/IR sensor is cued to the POO bringing live imagery from the POO or impact point. Utilizing an aerostat system reach effective altitude, the system is designed to deliver the required performance at minimum logistic footprint. The DB-1 system was developed by Vigilance, an Aerospace and Defence company from the Netherlands. In its force protection application, DB1 provides a compact and mobile system which can be deployed on compounds as well as during patrols when staying overnight. This enables coalition troops to give a fast and effective response to hostile fire.

Defence Against Mortar Attacks (DAMA) is one of ten high priority thrusts for NATO coalition forces. This was reflected in the 2004 Istanbul summit and Conference of Armaments Directors (CNAD). DAMA focuses on means and methods to counter the threat posed by the terrorist use of mortars against static objects (e.g. compounds, critical civilian areas) during peace support operations. Although not the primary focus, the DAMA results could also contribute to the defence against other indirect fires, be applicable in other scenarios and improve the protection of slow moving objects (e.g. convoys). Besides technological means, DAMA also investigates doctrinal and procedural methods to counter mortar threats.