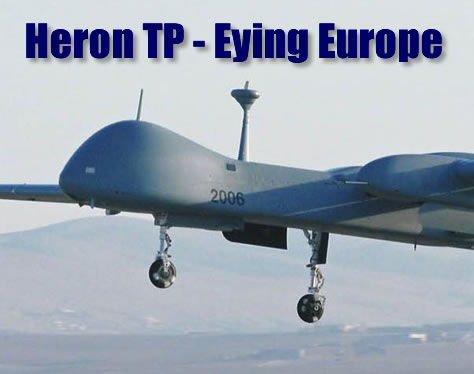 Israel Aerospace Industries and Rheinmetall Defence signed today (June 2, 2008) in Israel a cooperation agreement to jointly market IAI’s Heron TP unmanned aerial system in Germany. The cooperation targets the German Federal Defense Forces (Bundeswehr) SAATEG UAV program planned for initial deployment as early as 2010, introducing a persistent reconnaissance gathering platform to operate in theater, in support of German and NATO deployed forces. According to the agreement, IAI will provide the UAV system, while Rheinmetall will be responsible for the mission control system, logistic support and networking and interfacing with other command and control systems. The German Air Force (Luftwaffe) will be operating these systems, under its 51 aerial reconnaissance wing to operate from Jagel Air Base. The unit is expected to operate the Euro Hawk, a Global Hawk derivative designed to address NATO’s SIGINT requirements. While controlled from Jagel, the unmanned aircraft could be deployed overseas, including Mazar-e Sharif in Afghanistan, from where they will be able to support ISAF operations in theater.

EuroHawk is being developed by EuroHawk GmbH, a joint venture between EADS and Northrop Grumman. The company was awarded €430 million to develop, build and fly the first demonstrator by 2010. Unlike the EuroHawk focus on SIGINT, the platform selected for SAATEG will be equipped primarily with high resolution electro-optical payloads. The plan calls for five UAVs to be procured for an initial capability. Sofar the Luftwaffe’s SAATEG plans where endorsed by General Atomics, teaming wit Diehl BGT Defence. The IAI/Rheinmetall Defence team claims that the Heron TP is meeting all the SAATEG criteria in its current form. TheHeron TP has been developed at IAI to address the requirements of the Israel Air Force and tose made by several international air forces. Several systems are already completed and tested and the entire system is ready for serial production.

While the Predator B (Reaper) is already operational with U.S. and British Royal Air Force in Afghanistan, the Heron TP could evolve as a strong competitor, particularly in Europe, following the support of major European companies including Dassault Aviation, Thales and Indra, to the Heron TP platform. Last week (May 22, 2008) the industry team submitted a proposal to the French and Spanish ministries of defence, establishing MALE UAV capability to be developed within the framework of Franco-Spanish cooperation. This capability to be based on Heron TP platforms, would match the operational needs of both countries, and allow the supply to both Armed Forces of long endurance UAVs for theatre surveillance by the end of 2012.

The Heron TP was unveiled last year at the Paris Air Show. (below)