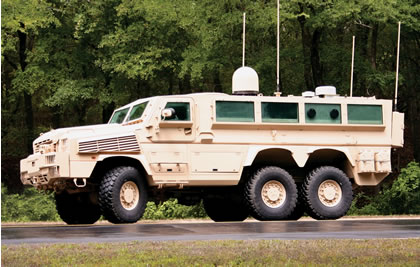 The US Army is planning to deploy new communications hubs mounted on MRAP vehicles, to establish ‘everything-over-IP’ (EoIP) network in support of mobileoperations or temporary deployments. The vehicles, to employ DataPath satellite on the move link will establish robust line-of-sight (LOS) and beyond-line-of-sight (BLOS) network to support forward command elements on temporary deployment or on the move. With this communications hub moving on the battlefield, many other users and vehicles can leverage the BLOS connectivity to establish mobile, high- bandwidth capability to send and receive video, data and voice communications.

The order awarded by the Army’s WIN-T program office, will initially include a SATCOM hub earth terminal and two satellite COTM systems that will be installed on U.S. Army Mine Resistant Ambush Protected (MRAP) vehicles. With all options exercised, work under this agreement could total up to $3.9 million, including the initial COTM systems, the hub earth terminal and options for additional systems.

The DataPath COTM solution for the U.S. Army includes a low-profile antenna that can enable satellite communications (SATCOM) connectivity at vehicle speeds of 80 miles per hour or more. DataPath’s MobiLink system will also be an integral part of the tested COTM solution. The MobiLink fits into a standard SINCGARS MT-6352 tray and links to land mobile radio (LMR) and satellite COTM facilitating  effective cross-band through on-board communications.