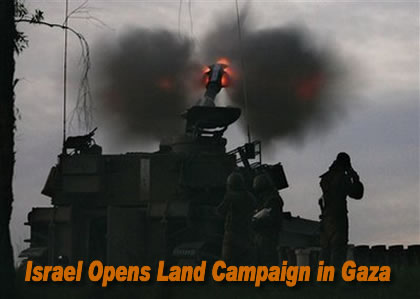 By Saturday evening, Israel expanded its Operation Cast Lead, expectedly launching the land campaign sending its land forces into the Gaza Strip. According to the IDF, its the objective is to take control of some of rocket launching area used by the Hamas, in order to greatly reduce the quantity of rockets fired at Israel and Israeli civilians, in parallel, As a result, the IDF is seeking to destroy the terrorist infrastructure of the Hamas in the area of operation.

Large numbers of forces are taking part in the operation, expected to span over days. The forces participating in this phase of the operation include infantry, armor, combat engineering forces, artillery and intelligence with the support of the Israel Air Force, Israel navy, Israel Security Agency and other security agencies. The Commander of the operation i

s Maj. Gen. Yoav Galant, commander of the Southern Command. The forces participating in the operation have been highly trained and were prepared for the mission over the long period that the operation was planned.

The attack followed continuous air and naval attacks conducted through the recent days. Since the early morning hours of Saturday, January 3rd, 2009 the IDF has attacked over 40 Hamas targets in the Gaza Strip, including a training camp, weaponry storage facility, smuggling tunnel, an armed launcher and launching bases.

The Palestinians responded launching some 19 Qassam rockets and Grad missiles towards Israel, hitting an apartment building in the city of Ashdod, wounding two Israelis. A short time after the attack IAF aircraft identified and destroyed the launchers used in the attack.

After Thursday’s attack that killed Hamas #3 leader, Nizar Rayan, the air force continued to hunt down senior Hamas operatives. Today aircraft also struck the vehicle transporting senior Hamas commander Mohammed Ma’aruf and an additional Hamas operative in Khan Younis early Saturday afternoon. Ma’aruf was part of Hamas’ military wing and served as an officer in the terror organization’s ground forces. Also departed was Abu Zakaria al-Jamal, died from wounds sustained in an earlier airstrike. Al-Jamal was a another senior military figure in the terrorist group’s armed wing. Later in the afternoon and throughout the evening, the air force and artillery concentrated attacks on the open areas where the land forces were expected to move, in an effort to neutralize part of the threats from mines, IEDs and ambushes. During these evening attacks a fuel and gas depot was set ablaze.

Meanwhile, as part of Operation Cast Lead the IDF has begun to draft reserve units, in order to allow the expansion of the operation. Last week the government approved mbilization of 6,500 troops to support the operation. The recent announcement is expected t add more troops. IDF indicated the majority of the reservists called up belong to combat units, some form part of the Home Front Command and the remainder belong to various other military units.

Unlike the 2006 mobilization for the ‘Lebanon 2’ war, two years ago, the reserve units will be reporting for duty after having undergone extensive training. Furthermore, much of the emergency stores and military equipment have been restored. A special emphasis is also being placed on logistic support for the reserve units, which proved particularly uneffective during the 2006 war.

Sofar in operation Cast Lead the IAF attacked 750 targets along the Gaza strip, while the Palestinians launched 550 rockets and mortar bombs at Israel. 463 Palestinians were killed, mostly militants 2300 were wounded. (The Palestinians claim about 150 of the killed were non combatants). In Israel, four were killed (one soldier) and 287 wounded.