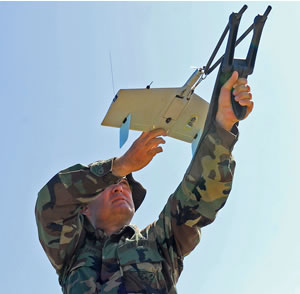 Weighing only one pound (430 gr.), Wasp III has a wing span of 2.375 ft (72 cm). Wasp III Micro unmanned aircraft sytems from Aerovironment is a small, electrically powered unmmanned aerial vehicle developed under a DARPA Micro-UAV program. Wasp III is Equipped with forward and side looking color video cameras, as well as a modular forward or side looking electo-optical infrared payload.

In 2006 the Air Force Special Operations Command (AFSOC) selected the Wasp III as its Battlefield Air Targeting Micro Air Vehicle’ (BATMAV). AFSOC plans to use these systems in support of ground combat contriller teams. In 2007 the US Air Force recently took delivery of the first production version of the BATMAV. AV is producing the systems under a $45 million, five year contract to supply 30 systems to the US Air Force.

In November 2007, the US Marine Corps also ordered the Wasp III for its ‘Tier I’ micro UAV requirement. The USMC order totals $19.3 million. Sofar the corps was using two mini UAVs at the battalion level – the Dragon Eye and the Raven made by AeroVironment. Both were fielded at the Marine Expeditionary Units (MEU) level. The smaller Wasp III will be deployed at the platoon level. To maintain commonality among deployed systems, the wasp III uses a ground control system common to the Raven B and Puma mini UAVs. The Wasp III mission endurance is 45 minutes, at a range of 5 km. At its mission termination point the Wasp lands horizontally over flat surface. A water landing version is already under development.

The Wasp III payload integrates several fixed cameras performing different tasks. The forward camera maintains field orientation with a broad view of the scene, while the side view camera, utilizing higher power magnification is generally used for target investigation. To maintain continuous coverage of a specific target, the Wasp automatically circles around it, maintaining the designated target in the side camera’s field of view. The system is packed in a small suitcase, rapidly assembled within few minutes and is launched by hand toss. 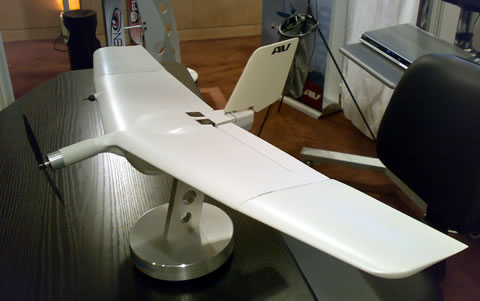