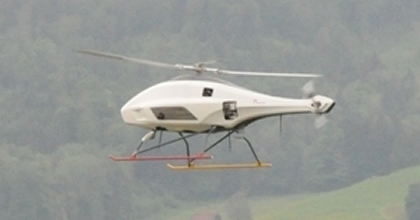 Saab and Swiss UAV (SUAV) have signed a strategic partnership agreement to introduce cost-efficient vertical take off and landing (VTOL) Unmanned Airborne Systems (UAS). The agreement covers collaboration regarding the design and testing of systems developed by the two companies, including the Skeldar system developed by Saab and the Neo and Koax systems developed by the Swiss company and the integration of Saab’s common ground control system to support all systems.
“We are convinced that the co-operation between Saab and SUAV combined with our joint business effort will be a success for our VTOL systems” said Pontus Kallén, Senior Vice President Saab and Managing Director Saab Aerosystems. “It is a win-win situation for both us and our customers” Kallén added. “This partnership is a strategic landmark in the development of the company.” Lars Zander, CEO of Swiss UAV agrees.

Saab will bring to the marriage the Skeldar UAS system under development in Sweden since 2006. A 200 kg Maximum Take-off weight (MTOW) platform, Skeldar is designed for use in both land and maritime operations carrying payloads and fuel for 4-5 hour missions. In 2008 SUAV has introduced the Neo S-300, at half the weight of the Skeldar (75kg) it is capable of carrying a payload weight of 20 kg plus 32 litres of fuel supporting mission duration of 150 minutes. Neo was designed for security and surveillance missions such as pipeline monitoring. The smallest UAV introduced by SUAV is the 45 kg Koax X-240, designed primarily for security and force protection missions is a more compact platform, capable of flying missions of up to 90 minutes with a payload weighing up to 8 kg. Koax made its first flight earlier this year. These vehicles are smaller then Skeldar but still operate with an advanced autonomy system, ideal for compact land operations.

The two companies have already began flight trials in Switzerland with all three systems, exploring and verifying autonomous behavior and system capabilities. According to Kallén, the combined family of vehicles will be integrated with Saab’s Ground Control Station know-how. “At the same time SUAV will support Saab activities in development and there are already some specific projects underway” Kallén added.