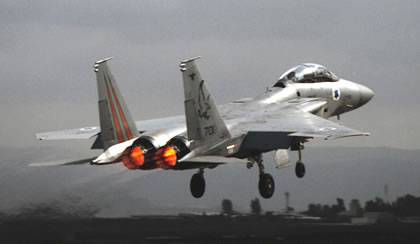 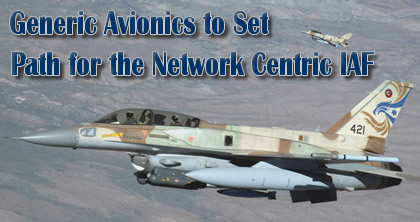 The Israel Air Force is embarking on an ambitious avionics enhancement program that has the potential to upgrade the air force’s entire combat fleet, including fighter, transport and helicopters, facilitating advanced network centric services and capabilities throughout the air force’s combat assets, new and old.

The upgrade will streamline the avionics levels of all the air force assets, from the future JSF, through the recently fielded F-16I to earlier fighter jets and attack helicopters. Unlike earlier upgrade programs, which required replacement of avionic units, the new avionic modernization will introduce a new ‘Generic Avionic Server’ (GAS) hosting new avionic applications, and acting as a ‘mediator’ between the air force’s network and the aircraft avionic system. IAF avionics experts consider this approach suitable to deal with most of the challenges derived by the rapid obsolescence of electronic systems, complex and long development and integration processes involving modern network centric applications, particularly when matched with equally complex, physically, energy, processing and memory challenged avionic systems.

Air force officials consider the implementation of ‘generic avionic systems’ could solve some of these challenges by simplifying system integration. Applications running on the new server will be loosely coupled, using the Data Distribution Services (DDS) standard to communicate data with legacy avionics and among themselves. Additionally, the generic computer will have to be integrated only once into each of the platforms, regardless of the upgrades to the network services. One of the applications the IAF could be considering is an air-force wide situational awareness application that will take advantage of network-centric communications, and data sharing to develop a tactical picture form known aircraft positions of friendly units as well as non cooperative targets. Utilizing the GAS approach for such an application, the air force will be able to leverage an application developed for fighter aircraft and implement it in combat helicopters, with minimum adaptation. Other applications could address accelerated and dynamic kill chains (‘sensor to shooter cycles’), and employment of in-flight network-based virtual training for joint forces (air, land, sea and C4I).

The IAF considers GAS to implement the hardware and generic system services referred as ‘horizontal’ services, maintaining ‘household’ services such as communications and displays controls. ‘Vertical’ applications will employ specific algorithms running mission specific services. When fully deployed, this separation will simplify and accelerate the evolution, integration and rapid fielding of new services, since new applications will be developed to run on ‘virtual machines’, which are both hardware and platform independent, designed to run on GAS rather than on the mission computer of each of the different aircraft types.

As part of the multi-year planning, the IAF conducted a thorough ‘mapping’ of all its avionic resources, to come up with a single piece of hardware that could match the space, power and cooling resources of all platforms. Next, the IAF launched a development program, to demonstrate the new capability. A single contractor will be selected to provide the systems to be implemented throughout the air forces units. Few weeks ago the IAF released the long awaited request for proposal (RFP) for the new computer, and received proposals from four Israeli companies: IAI, Elbit Systems, Astronautics and Rada.

The Air Force is planning to adapt state of the art standards based protocols, such as, running commercial based avionic operating systems, implementing a high level of reliability, thus benefit from mature avionic development environment and availability of proven hardware and software modules. The new computer will be replacing or augmenting the Digital Video Recording systems which are being fielded throughout the fleet. When fully implemented the new computer and its associated networking and display services will provide existing and new platforms with scalable growth capability. On board systems on all platforms, regardless of their age will gain seamless access to all the information on board, access to the airborne data network, including live video.

While the GAS is an ambitious undertaking, the Air Force is hopeful industry will address this new approach by developing new network-based applications on a runtime licensing basis. The IAF has already initiated ‘cooperation’ with potential ‘partners’ for such systems, and is seeking innovative ways to leverage application development as well. Officials consider the new approach will dramatically reduce the total cost of ownership for the airforce, in addition to minimizing the development and integration efforts required by the industry. The IAF is hopeful the industry will back the new avionic architecture, helping fulfill its potential, and generate a huge amount of applications, as the minimal entry level for generation of such has lessened.