As the JSF founding members squirm for excuses to cut projected orders, anticipating the program’s soaring costs consuming growing shares of local defense budgets, Israel is expected to become the first international customer to commit to the next generation stealth fighter, although the country has not formally joined the program as one of the ‘founding members’.

Bowing under unprecedented financial pressure, the U.K. is moving to axe the planned construction of one aircraft carrier, along with up to 88 F-35B (V/STOL) fighters that would be operating on board, saving about £7.6 billion in out-year budget. 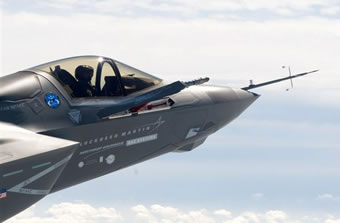 Financial issues have also led the Australian government to defer the decisions to commit on the planned procurement of 3-4 squadrons. By delaying procurement decisions to 2010 and possibly cutting the number of aircraft operating with each squadron, from 24 to 14, Canberra is hopeful the A$16 billion investment could be approved next year. Netherlands and Denmark have not made their final decision about the aircraft yet, although both are supporting the acquisition of the American stealth fighter. Norway has decided in favour of the JSF but hasn’t ordered the aircraft to date. Even the U.S. Air Force ahs not placed orders for serial production fighters to date.

With such malleable backing to their program, no wonder that the U.S. is aiming at the ‘captive’ markets – clients dependent on U.S. aircraft – such as the Israelis and Turks – to stabilize the program. Turkey has embarked on a shopping spree for defense systems, investing well over $30 billion in arms procurement over the nbext 5 years. As a program member Turkey is planning to produce about 100 of the 130 F-35As it plans to buy over the next decade. Turkey has also produced hundreds of F-16s for its air force. Israel plans to replace at 2-3 F-16A squadrons with the F-35A, however, unlike the Turks, Israel has not received any commitments for its local industries, neither arranged for local assembly. Italy is also considered a strong candidate, although Rome has not yet committed to the procurement phase, the F-35Bs will be needed sooner or later, to replace the Sea Harriers on its aircraft carriers. However, the number of aircraft to be fielded will undoubtedly be influenced by the British decision and the flyaway cost of the F-35B, which is currently supported by the U.S. Marine Corps and the U.K.

Despite the recognition that the IAF needs the new stealth fighter to maintain its qualitative edge within the Middle East, Israel has sofar delayed its decision due to a number of reservations by the Air Force, regarding the aircraft operational range, payload and avionic suite. Through all its recent aircraft acquisitions, Israel insisted including a comprehensive array of electronic systems, primarily electronic warfare suits, command, control and communications, as well as specific weapons operated by the IAF, that provided the Israeli variants of such fighters a qualitative edge over similar types operated by Egypt, Jordan or Saudi-Arabia. These systems also provided the new fighters to be fully integrated within the Israeli command and control system, optimally operate under all conditions, and be prepared to employ indigenously developed weaponry, such as the Spice EO standoff guided weapon or Delilah loitering missiles, which have to be individually integrated into the operating systems of IAF fighters.

However, the architecture that provided the baseline of the JSF design prevents such changes, as they are effecting the entire aircraft operation. Alternatively, users are provided with selective access to the operational system, enabling limited integration of weapons, and avionics systems to operate with on-board assets. While such approach provides more flexibility for users with limited requirements, it does not allow for close linking with on board functions and capabilities, required to maintain the fighter’s stealth and low electronic emission.

As for the limited range, Israel has a relatively unique operational requirement – to nbe able to extend its strike capability over thousand miles inside enemy territory, reaching as far as Iran, while flying within potentially hostile airspace. Stealth was considered a key capability for gaining operational flexibility for such operations, which would be based on the fighter’s unrefuelled range – internally carrying both fuel and ordnance over extended range. While the basic F-35A has an operational radius of 610 nautical miles, an extra fuel tank could extend its range considerably, matching the proposed stealthy F-15SE ‘Silent Eagle’ that could be offering an operational radius of 800 nautical miles, with limited stealth capability.

Despite these obstacles, Israel apparently decided to remove these requirements, at least for the first batch of 25 aircraft, realizing that the required changes could drive the acquisition cost of the Israeli F-35A variant to beyond $130 million a peace, delaying delivery schedules far beyond Israel’s requirements. The indigenous systems would mean the stealth fighter would maintain a qualitative edge over similar fighters, if (or when) delivered to other U.S. allies in the region. The inclusion of additional internal fuel would contribute to more flexible mission planning, particularly in the ‘outer circle’ where Israel is required to operate deep inside enemy or hostile territory, beyond 1,000 km, as far as in Iran, where stealth capabilities are mandatory and aerial refueling may not be possible.

Once the special requirements of the IAF are relieved, the aircraft cost could return to just over $80 million a piece. The IAF is expecting the first aircraft to be delivered in 2014 to replace the first F-16As that would be phased out by that time. The projected modifications could delay this schedule by at least 24 months.

However, the Israelis could be eluding themselves with $80 million cost per aircraft, as the Pentagon is already preparing the ground for major cost increase. According to a recent report by the Department of Defense Joint Estimating Team (JET), the JSF program may be exceeding budget by $16 billion, and slip off schedule in the next five years. This bleak prediction is not shared by the joint program office, which stresses that development and testing are progressing well and within schedule.

One of the arguments for not having to integrate locally developed systems is the high quality of the advanced systems already integrated into the aircraft. The two videos above show the radar and distributed EO systems. Below, an example of the high definition, integrated targeting system is demonstrated, This system replaces the traditional targeting pods such as the Sniper or Litening, used on other tactical aircraft.

Video below: An alternative to the F-35, yet on paper, is the Silent Eagle F-15SE proposed as an upgrade for F-15Es or new built aircraft. (a Boeing marketing Video). The first F-15SE technology demonstrator is scheduled to fly in mid 2010.