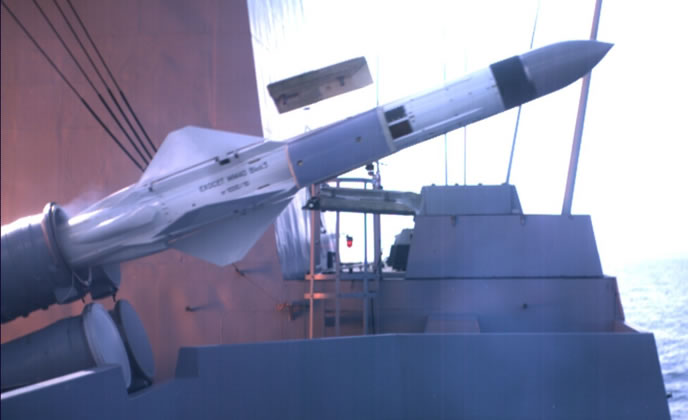 Above: Exocet MM40 Block 3 on its first test flight at sea. Photos: DGA

First A first firing of an Exocet MM40 Block 3 anti-ship missile took place March 18, 2010 at the missile test site operated by the Directorate General Armaments (DGA) the Ile du Levant, in the Mediterranean Sea, off the port city of Toulon. The missile was fired by the Horizon type frigate Chevalier Paul, recently delivered to the French Navy. The Exocet manufacturer, MBDA is converting 45 Exocet MM40 Block 2 missiles into block 3 configuration improve their operational capability, particularly in the littoral area.

According to MBDA, the new configuration extends the weapon’s over-the-horizon capability from 70 km to a maximum range of 180 km, utilizing on-board GPS, and the introduction of land-attack mode, enabling operators to set target coordinates in longitude, latitude and elevation. This new capability significantly enhances the missile’s anti-ship capability, as the new Block 3 can approach the target through a preplanned 3D flight trajectory, performing the terminal attacks from the least predictable direction, at very low sea skimming altitude. For the terminal phase guidance, the missile utilizes a J-band active radar seeker with adaptive search patterns which selectively discriminates between targets at sea and GPS designated coastal based targets.

The missile are complemented by a new version of the mission planning system, enabling operators to maximize the use of the new features exploiting the missile’s capability to penetrate the target’s defenses.

The Block 3 airframe design is optimized with low signature characteristics. Its extended range is derived by a new propulsion system that includes a booster and turbojet sustainer, feeding from four air intakes which provide high maneuverability at the terminal phase.

MBDA was developing the Block III since 2004, but only in 2008 DGA and the French Navy officially embarked on the program. First deliveries are expected to begin this year and continue through 2013, to equip the French Navy FREMM frigate. Besides the French Navy, the Block 3 has been ordered by the navies of the UAE, On April 22, 2010 the Qatari Emiri Navy announced plans to equip the four Vita class patrol boats with the MM40 Block 3 missiles. Oman and Morocco are also buying the missile. At present the Block 3 is designed only for the replacement of Block 2 missiles on surface ships.