The U.S. is funding the production of four more batteries of Iron Dome missile systems, to assist Israel in defending against short-range anti-rocket attacks from Gaza and South Lebanon. According to the director of the U.S. Missile defense Agency, Army Lieutenant General Patrick O’Reilly, speaking to the the US Senate Appropriations Defense subcommittee, the proposed MDA budget includes funding for the procurement of four more batteries. 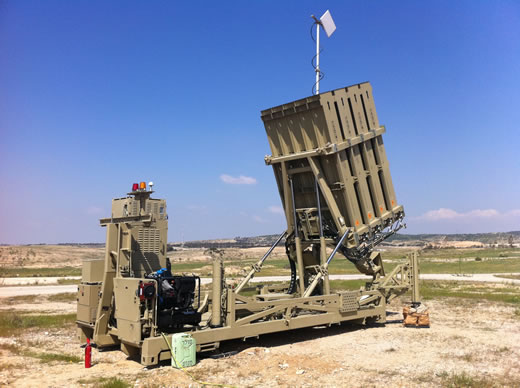 O’Reilly was referring to fiscal 2011 funding of $203.8 million added last June at the request of President Barack Obama. This funding was first direct US investment in the production phase of the project. Two Iron Dome units are currently deployed in the Southern area of Israel, near the Gaza strip. The combat tested system demonstrated its capability on April 7, 2011 intercepting eight rockets fired at the city of Ashkelon and Ashdod, during a recent series of hostilities between the Palestinians and Israelis. Over 50 rockets were fired at Israel through these engagements, most of them fell outside populated areas. Iron Dome’s battle management system tracked each of the rockets, determining which rocket could pose a threat and which provides low collateral risk that did not justify an intercept. the system also tacked back each of the launching points, assisting IDF suppression attacks.

The Israel Air Force is standing up the third Iron Dome unit, which is expected to become operational by year’s end. Three additional units are scheduled to deploy with the systems by the end of 2012, enabling the IAF to position defensive systems in the northern sector, along the Lebanese border and southern Israel while additionally protecting its air bases from missile and rocket attacks. Rafael is currently modifying the system to be truck mounted, thus becoming more responsive, capable of redeploying quickly between different positions. The truck mounted configuration will be unveiled at the Paris Air Show next month.