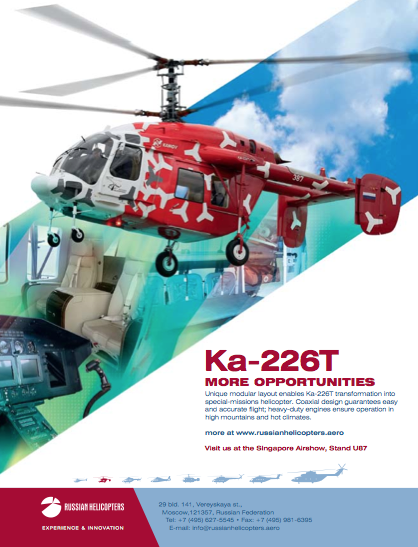 Russian Helicopters, one of the world’s largest helicopter manufacturers, is coming to the Singapore Air Show shortly after the opening of a representative office in Hanoi, Vietnam, as it beefs up its presence in the region.

The company is using this to office to boost its presence not just in Vietnam, a long term buyer of Russian hardware, but also the wider South-East Asia region and even further afield. “One of the main goals of this opening is to gain access to broader markets, search for new partners and new cooperation modes in Southeast Asia and Australia.” says the manufacturer.

The Hanoi office will mean that the company is closer to the customer in order to provide aftermarket support. “By opening a representative office in Hanoi we will be able to establish an after sale support system for rotorcraft of Russian make that will be very accessible and comfortable for operators in this region,” says Russian Helicopters CEO, Dmitry Petrov.

Russian Helicopters has been building up a global support network based on certified MRO centres and joint ventures across the world. As well as the new centres being established in locations such as Vietnam, existing ones are undergoing certification in various regions around the world.
Over 300 Mil and Kamov helicopters are operated today in Southeast Asia and Australia. The fleet of the Republic of Vietnam numbers over 60 rotorcraft, constituting about 50% of the total civil helicopter fleet and up to 90% in the military segment. These include various modifications of civil helicopters, such as the Mi-8/17, Ka-32, and the military Mi-24 and Ka-28.

Russian Helicopters has also recently upped its presence in the Middle East, appointing Emirates Corporation Trading Agencies as a regional distributor of the light single-engine helicopter Mi-34C1 in the Gulf countries. The Agreement was signed in Dubai, UAE, at the recent Dubai Airshow. The Agreement involves marketing, sales and technical support for the Mi-34C1, as well as flight training.

A key market for the company is India, where last year the first batch of Mi-17V-5 helicopters was delivered. The helicopters are manufactured by Kazan Helicopters, a subsidiary of Russian Helicopters. Joint Russian-Indian projects to deliver new helicopters, spares, and aviation equipment are under way and as of last year, the Indian Air Force operated over 200 Mi-8/17 type medium rotorcraft of Russian make.

Russian Helicopters is also active in the Chinese market – last year a deal was agreed for the delivery of a civil all-weather multirole coaxial Ka-32A11BC helicopter in its firefighting variant to Inner Mongolia. The helicopter is equipped with the Simplex firefighting system, horizontal water cannon, and VSU-5 water-dumping system. The unit will be delivered to Ordos City in Inner Mongolia in September this year.

One Ka-32A11BC is currently operated in China, performing various missions for the Chinese Arctic and Antarctic Administration. The Ka-32A11BC is certified in China and has also received airworthiness certificates in the world’s largest regions – in America, Asia, and Europe.

Today Ka-32 helicopters of various modifications are successfully operated in Spain, Portugal, Switzerland, Canada, South Korea, Taiwan, Japan, China, and other countries. In South Korea the 60- plus strong fleet of Ka-32s are used for firefighting with the Forestry Service, and by the Coast Guard.

Headquartered in Moscow, Russian Helicopters operates five helicopter assembly plants, two design bureaus, two components production plants, one overhaul plant and one helicopter service company providing aftermarket services in Russia and abroad. Although Russian Helicopters was established only in 2007, some of the company’s subsidiaries have existed for more than 60 years.