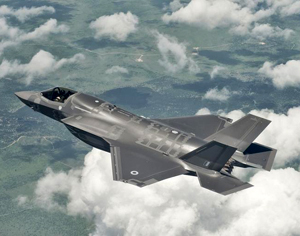 The Royal Air Force has announced that 617 Squadron, the famous ‘Dambusters’, will be the first operational squadron using F-35B Lightning II aircraft. According to Chief of the Air Staff, Air Chief Marshal Sir Stephen Dalton, the 617 Squadron is to disband on 1st April next year, as part of the planned drawdown of the Tornado GR4 force. It will then reform in 2016, taking delivery of the highly advanced Lightning II. Dalton made the announcement at a Royal United Services Institute (RUSI) conference on Air Power this week. Later this year 617 Squadron will deploy to Afghanistan for the last time as a Tornado GR4 Squadron to support NATO and Afghan troops.

Dalton added that the Lightning II shall be operated jointly by the Royal Air Force and Fleet Air Arm pilots, from land or from the Queen Elizabeth Class carrier. Overall, a hugely flexible and futuristic joint capability. When it reforms in 2016, 617 Squadron will have both RAF and Royal Navy personnel. The next squadron will carry a Royal Navy squadron number but be similarly jointly manned.

“The Lightning’s state of the art stealth and precision target capabilities, together with the battle-proven Typhoon force, will complement each others’ capabilities and set the base-line for UK Combat ISTAR2 air power as a contemporary global force for the 2020s and beyond.” Dalton added. The UK’s Lightning II is the Short Take Off and Vertical Landing (STOVL) variant of the Joint Strike Fighter, which will give the supersonic multi-role stealth aircraft the ability to operate from land or sea.