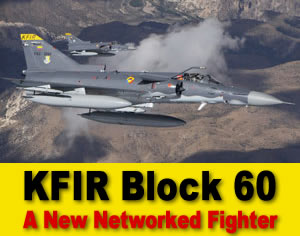 Israel Aerospace Industries (IAI) is offering a modernized version of its 1970 era delta-winged Kfir Mach 2+ fighter aircraft. Equipped with advanced avionics and mission systems that, the IAI claims its old fighter jet could rank in the same class of contemporary ‘fourth generation’ fighter jets. According to sources at IAI, the company can deliver up to 50 Kfirs, configured to the newest ‘Block 60’ standard, utilizing airframes retired from IAF service in the 1990s. These aircraft were mothballed in the southern Negev desert, and are in good condition for refurbishment. Israel has offered these modernized fighter jet to Bulgaria, addressing Sofia’s planning to replace its MiG-21s and MiG-29s with western-compatible fighter jets.

Bulgaria is interested in buying 10 ‘pre owned’ fighter jets, optimizing them to fulfill combat missions with the NATO alliance. Among the alternatives evaluated by Bulgaria is the procurement of nine used F-16 Block 15s from Portugal, at a cost of $464 million; purchasing Eurofighter Typhoon fighter jets from the Italian Air Force surplus would cost even more. According to IAI, the acquisition of Kfir Block 60 from would cost a third of that price. Bulgaria was also evaluating a Swedish proposal to buy new Gripen fighter jets from Saab.

The Kfir Block 60 offers a robust and versatile Mach 2+ multi-role jet fighter, carrying 5.5 tons payloads on nine hard-points under the wings and fuselage. The weaponry is enhanced to include Python 5 and Derby. Kfir Block 60 has also completed the integration of RAFAEL Spice autonomous guided weapon, (second platform offering that capability, after the F-16). Conforming to NATO standards, Kfir Block 60 supports Link-16 datalink protocol. The aircraft has combat radius of 1,000 km (540 nm) unrefueled. With refueling the aircraft can fly to a range of 1,100 nm.

Melamed claims Lahav can deliver the first Kfir Block 60 within 12 months after receiving the an order, at roughly a third of the cost of other fighter jets with similar capabilities. This assessment is based on the experience IAI Lahav has gained processing over 2500 aircraft, upgrading earlier Kfir, F-4E, F-16, A-4M, MiG-21, MiG-27, MiG-29 and Su-22. “At times where air forces are seeking cost savings, without degrading operational capabilities, the upgraded Kfir has demonstrated superior performance and reliability in operational use and combat exercises.” Melamed concludes.