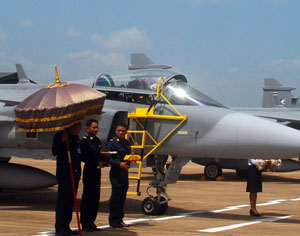 The kingdom’s 2013 defense budget rose to US$5.7 billion, a 7% increase from the year before. Increased spending in recent years has allowed an already capable military to modernize and add new weapon systems to its inventory. The website Global Firepower actually ranks Thailand as the 20th most powerful military in the world.

Swedish company Saab has made giant inroads into the Thai market in terms of both aircraft and shipborne systems. On September 4th, 2013 Saab delivered the final four Gripen JAS39C/D fighters to the Royal Thai Air Force (RTAF). Two tranches of aircraft have given the air force a total of 12 Gripens, two Saab 100B Argus Airborne Early Warning & Control (AEW&C) aircraft fitted with Erieye radar, and two Saab 340 aircraft. Thailand’s new fighters will also gain RBS-15F anti-ship missiles as part of their armament.

Saab is reportedly interested in basing its planned Saab Gripen Fighter Weapon School in Thailand, this after South Africa failed to support the initiative. Saab opened an office in Bangkok in August to help expand its footprint throughout the Asia-Pacific region. The office will serve as a regional hub to integrate work already undertaken by offices in Australia, Indonesia, Japan, Malaysia, Singapore and South Korea.

In June 2013 the RTAF gained a green light to order an Airbus ACJ320 jet for VIP transportation.

Thailand is also a keen buyer of helicopters. The country is desperately in need to replace its aging fleet of UH-1H Hueys. In August 2012, Thailand approved the procurement of four Eurocopter EC725 helicopters from France, to replace part of those Hueys tasked with search and rescue missions. In October 2012 the Thai Army also signed up tor two AgustaWestland AW139 helicopters, due for delivery in 2014.

Continuing with the aircraft theme, in mid 2012, Enstrom completed delivery of 16 480B training helicopters. Thailand has also been a long-time user of US helicopters and this is not going to alter anytime soon. In June 2013, the US Congress was informed of a potential sale of six US manufactured UH-72A Lakota helicopters; the RTA already operates the Sikorsky UH-60L Black Hawk, and the Army has signed up for three new UH-60Ms. Since 2012 Thailand is also operating the Lockheed Martin TPS-77 long-range air surveillance radar.

The RTAF is leading a program to develop a UAV to improve border and territorial surveillance. Project Tiger Shark has already developed several prototypes but Thailand is also believed to have purchased the Aerostar UAVs from Aeronautics in Israel for that role.