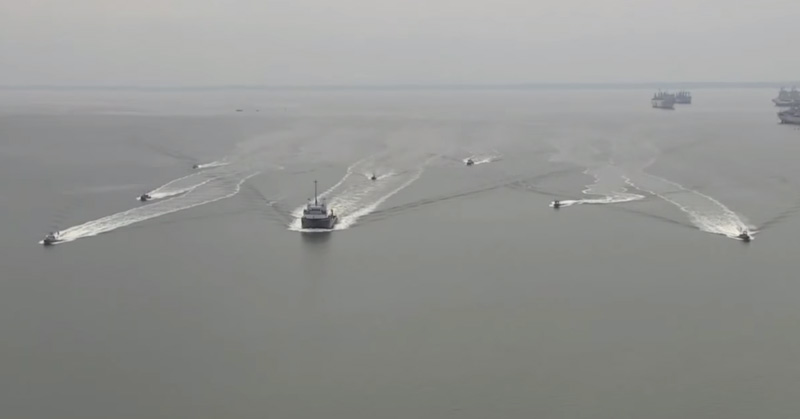 As autonomy and unmanned systems grow in importance for naval operations, officials at the Office of Naval Research (ONR) announced a technological breakthrough that will allow any unmanned surface vehicle (USV) to not only protect Navy ships, but also, for the first time, autonomously “swarm” offensively on hostile vessels. The new technology will allow the USVs to detect, deter or destroy attacking adversaries. Any weapons fire from the USVs would need to be initiated by a Sailor supervising the mission. Another US Navy division, Naval Surface Warfare Center, has also used robotic platforms – integrating both unmanned surface and aerial vehicles into a system designed to accelerate the targeting and fire correction of naval gunfire.

The technology—called CARACaS (Control Architecture for Robotic Agent Command and Sensing) – originally developed by NASA for the Mars Rover – and modified by ONR to support USVs. The CARACaS software can be put into a transportable kit and installed on almost any boat. It allows boats to operate autonomously, without a Sailor physically needing to be at the controls—including operating in sync with other unmanned vessels; choosing their own routes; swarming to interdict enemy vessels; and escorting/protecting naval assets.

During a two week test conducted in August 2014 on the James River in Virginia—allows, multiple USVs demonstrated swarm tactics autonomously, equipped with sensors and software enabling those swarming capability. “This networking unmanned platforms demonstration was a cost-effective way to integrate many small, cheap, and autonomous capabilities that can significantly improve our warfighting advantage,” said Adm. Jonathan Greenert, chief of naval operations.

In the demonstrations, as many as 13 Navy boats operated using either autonomous or remote control. First they escorted a high-value Navy ship, and then, when a simulated enemy vessel was detected, the boats sped into action, swarming around the threat. In the future, the capability could scale to include even greater numbers of USVs and even to other platforms, including unmanned aerial vehicles (UAVs).

“This multiplies combat power by allowing CARACaS-enabled boats to do some of the dangerous work,” said Dr. Robert Brizzolara, program manager at ONR. “It will remove our Sailors and Marines from many dangerous situations—for instance when they need to approach hostile or suspicious vessels. If an adversary were to fire on the USVs, no humans would be at risk.”

“Our Sailors and Marines can’t fight tomorrow’s battles using yesterday’s technology,” said Chief of Naval Research Rear Adm. Matthew Klunder. “This kind of breakthrough is the result of the Navy’s long-term support for innovative research in science and technology.”

The swarm demo announcement comes near the somber anniversary of the terrorist attack on USS Cole (DDG-67) off the coast of Yemen. In that October 2000 attack, a small boat laden with explosives was able to get near a guided-missile destroyer and detonate, killing 17 Sailors and injuring 39 others. “While the attack on Cole was not the only motivation for developing autonomous swarm capability, it certainly is front and center in our minds, and hearts,” said Klunder. “If Cole had been supported by autonomous USVs, they could have stopped that attack long before it got close to our brave men and women on board.” (More about the experiment in Defense One)

During the demonstration gun fire engagement was ordered based on identification and targeting data provided by streaming video obtained from the USV. Once targets were acquired, an airborne Scan Eagle unmanned aerial vehicle provided real-time streaming video to spot, precisely target, engage and continually support reengagement through gun targeting corrections to the MK160 gun weapon system operator. The experiment used Visual Automated Scoring System (VASS) to instantly correct the gun targeting. “Scan Eagle has been deployed on guided missile destroyers for years to provide persistent electro-optical and infrared surveillance,” said Williams, adding that, “it has been used for Naval Surface Fire Support spotting to walk gun rounds onto an enemy target, but not in an automated fashion like in this experiment.” The NSWCDD-patented VASS is an automated, computerized method for determining gunfire miss distances using video data. With a non-line of sight weapon system, VASS allows the gunner to adapt gun pointing angle and converge gunfire onto a target without having to risk the lives of forward observers.