The U.S. Army is dispatching two specially modified Stryker vehicles designed to combat unmanned Aerial Systems (C-UAS). Developed as C-UAS Mobile Integrated Capability (CMIC) demonstrators the vehicles were evaluated during the recent Army Warfighting Assessment exercise at Fort Sill in October. The vehicles were flown to Germany last month to be tested with operational units in Europe. The deployment was requested by officials from US Army Europe.

“We know our enemy is using these capabilities,” said Maj. Russell Micho, who works for the Capabilities Development Integration Directorate at Fort Sill, OK. “This threat exists. ISIS is using drones. The enemy is attaching bombs to drones and dropping them on friendly forces and civilians. This threat didn’t exist five years ago.”

Taking two existing Stryker vehicles (a tactical armored vehicle) McClellan and the Aviation and Missile Research, Development and Engineering Center Science and Technology team took various systems that traditionally have little to do with one another, and created software to integrate them. “We made some changes such as adding a larger optic,” said McClellan. “The standard size of targets are changing. ‘Tank size’ was the normal size in the past, but now with new technology and with new threats we have to find small objects that are oftentimes impossible to see with the naked eye.”

McClellan called the CMICs a “rapid prototype,” but in truth, the two Europe-bound CMIC vehicles took two years to develop. The initial experimentation began in 2014 at Fort Sill’s Maneuver Fires Integrated Experiment (MFIX). During MFIX all the capabilities were spread across a hill and tested individually. Then, during the 2015 MFIX, they combined all the capabilities onto the two Strykers, creating the first CMIC prototypes. In the end, the two CMIC vehicles were used in two exercises at Fort Sill and two more at Fort Bliss, Texas.

Now, as they head to Europe, this will be the first time CMIC vehicles work with an operational unit, said Micho. The CMICs are joining a Stryker unit, making the transition smooth because the Soldiers are already familiar with the Stryker vehicle. However, the CMICs take with them new radios, computers, 3-D mapping, and full-motion video receivers, along with advanced electronic capabilities.
With all the new systems and equipment, Micho said the receiving unit will train for three weeks to understand how to use CMIC. Then two weeks will be spent incorporating them into the unit for them to use as their organic fire-support vehicles for the duration of the loan, which is about 180 days.

“A total of nine people will go with the vehicles,” said Micho. “They will help with equipment training and some will stay for the entire duration of the loan to help with issues as they arise. But the intent is for Soldiers to use the equipment and report back on how to improve on it.”

The team at Fort Bliss, TX developed another CMIC application using two HMMWVs carrying several sensors dedicated for the C-UAS role. The systems used with these prototypes are mostly in use by the Army, thus enabling rapid deployment and integration with the active force, if required. The systems on board include the Q-50 Counterfire Radar System, Lightweight Laser Designator Rangefinder (LLDR) and mast mounted Venom target acquisition payload, providing visual identification of targets. The radar that was originally designed to detect mortar bombs in flight uses modified software to improve detection of small or hovering UAVs. When the radar detects a drone it sends the bearing and elevation data to the LLDR which slews on the target. If further action is required, the system can direct soft or hard kill against it.

Read more on Counter-UAS in these features: (to be published soon) 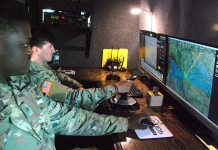