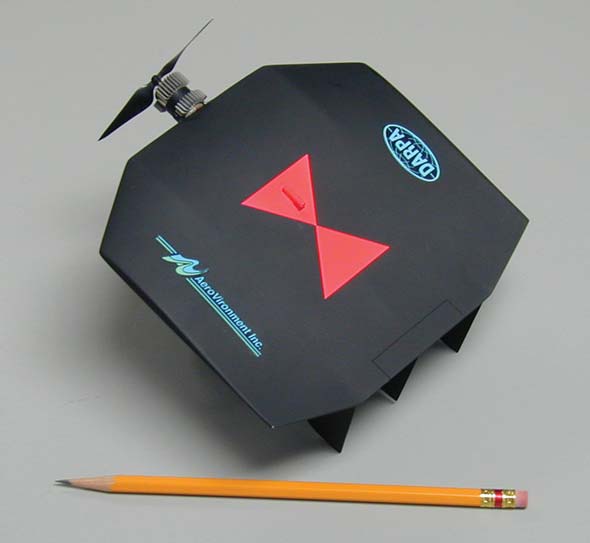 The “Black Widow” which was tested as part of DARPA’s MAV program, was a small fixed wing vehicle, designed in a circular platform. Its weight was only 50 gr. half of which amounted to the weight of the primary batteries. The Black Widow was powered by an electric motor that accelerated it to a maximum flight speed of 20 m/sec. In few years, the Black Widow program progressed from a vehicle that flew for only 2 minutes with no payload to a vehicle that could fly 30 minutes, to an altitude of 769 ft, and transmit color video to a base station 1.8 km away. The evolutionary Black Widow platform equipped with an increased wing surface area and wing loading (still within the 15 cm limitation) demonstrated maximum flight speeds of 40 miles per hour. Further improvements in propeller efficiency increased to a dramatic 82%; and 22 minutes in flight duration, using a “heads down” flight control through an on-board color video camera. The Black Widow airframe and propulsion system ultimately evolved to reach 30 minutes endurance, and flight range of 17 kilometers at a cruising airspeeds between 38 to 53 km/h. The control system was capable of “autohold” for heading, altitude and airspeed.

AeroVironment developed a light weight a transportable, Universal Ground Control Unit for the Black Widow, comprising of a control unit with the size of a laptop computer and an antenna. All the relevant data is superimposed on the colored daylight readable video image, as it is down-linked from the vehicle. Information includes the magnetic heading, altitude, airspeed and the health of the MAV. The widow is launched automatically from an expendable cassette pneumatic launcher, about the size of a cigar box.

To extend the communications range of the system, the Widow is supported by an aerial relay installed on another MAV – the Pointer, which will fly higher to accomplish a non-line-of-sight relay system for video transmissions. In this configuration, the Black Widow/ Pointer team can support operational deployment at urban or rugged and mountainous terrain, at ranges of up to 20km.