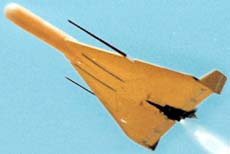 Dedicated for the Suppression of Air Defense (SEAD) mission, Harpy is an operational loitering attack weapon. The current version of Harpy is deployed as a fire and forget weapon. It patrols the assigned area, and will attack any hostile radar activated in its vicinity. When used in appropriate numbers, Harpy can be launched into a target area to support continuous operations, or time limited strike packages. Unlike anti-radar missiles such as HARM, whose speed, range and direction of approach are predictable, the killer drone deployment is more flexible and unpredictable, and therefore, conventional countermeasures techniques are not useful against it. In fact, Harpy is holding enemy radars at risk throughout its mission. Harpy system is designed to operate multiple munitions simultaneously over a specific area, to effectively cover the target. Each drone is deployed autonomously, without interference and overlapping the other drones.


The Harpy mission is planned and programmed in the battery ground control center, as an independent mission, or planned in accordance with other manned or unmanned systems. Prior to launch, individual weapons are programmed and tested, to verify their operational readiness. After the rocket-assisted launch, the drone flies autonomously enroute to its patrol area, predefined by a set of navigational waypoints. Due to its low speed and economical fuel consumption, the drone can sustain a mission of several hours over the target area. Its radar seeker head constantly search for hostile radars, both along and across the flight track. Once suspicious radar is acquired, Harpy compares the signal to the library of hostile emitters, and prioritizes the threat. If the target is verified, the drone enters an attack mode, as it transitions into a near vertical dive, homing on the signal. The drone is set to detonate its warhead just above the target, to generate the highest damage to the antennae, and surrounding facilities. If the radar is turned off before Harpy strikes, the drone can abort the attack and continue loitering. If no radar was spotted during the mission, the drone is programmed to self destruct over a designated area. Follow-on systems which are already proposed to foreign clients, are calling for a combination of seeker and killer drones that will enable visual identification and attack of targets even after they turn off their emitters.

The drone weighs 135 kg, and is 2.1 meter long with a 2.7 meter span. It is sealed in its sealed launcher/container, to endure harsh battlefield conditions. It can be fueled or defueled in the launcher, therefore retaining its readiness at all time. The system uses periodical built-in test to maintain full readiness. In order to verify the drone’s operational capability, its seeker head is being tested by a special radar simulator just before launch, to ensure that all systems are working.

The radar killer drone is launched from a canister which is also used as a launcher. Current Harpy modules are installed on trucks, and can be carried by C-130 transport aircraft. Each truck carries 18 weapon launchers. Each battery of Harpy is composed of three trucks, capable of deploying up to 54 drones for simultaneous, coordinated attack. The battery also has a ground control station and logistical support element. The system can also be deployed from the decks of assault landing ships, in support of marine or amphibious operations.

Harpy is currently operational with the Turkish, Korean, Chinese and Indian Armies, in addition to the Israel Air Force. In December 2004 China was reported to be interested in an upgrade of its systems to a more advanced version. Part of this work, conducted at IAI in 2005 caused severe friction between Jerusalem and Washington, as the Pentagon blamed Israel of assisting China in modernizing its weapon in breach of its agreements with the USA. In October 2005 a derivative of Harpy presented by MBDA in cooperation with IAI/MBT Division was selected as one of the finalists for the UK Loitering Munition Capability Demonstration (LMCD) program.