Troops engaged in modern asymmetric warfare are often exposed to high-risk threats, including surprise attacks by well planned and camouflaged ambushes involving well orchestrated use of IEDs, automatic fire and sniping. Such ambushes are difficult to detect as the enemy utilizes stealth, deception and concealment to hide the sources of fire.

To cope with these lethal traps, military forces must be equipped with the necessary tools for locating hostile fire sources and responding effectively and rapidly while minimizing exposure to snipers. New systems introduced at Eurosatory 2006 address these needs with acoustic gunshot detection, electro-optical sniper location, remotely controlled IED engagement capabilities and effective RF countermeasures that can denying the enemy the use of radio-frequency remote control systems.

The requirement for gunshot detection and counter-sniper systems has developed as a result of experience gained during recent counter-insurgency combat situations in South-West Asia. Several systems utilizing either acoustic or optronic methods of detection, were demonstrated at Eurosatory 2006. Among the acoustic systems was the Pilar, which was displayed in both a mobile configuration and a newly developed man portable version.

RAFAEL displayed its SADS system as part of a “Sniper Hunter” vehicle equipped with the Mini-Samson Remotely controlled weapon station, which can be coupled with an acoustic gunshot detector to provide instant response to gunshot threats. Other systems can deliver a warning as early as when a sniper is aiming his weapon.–These include the new Spotlite II from RAFAEL, SLD-500 from CILAS and SLS from Rheinmetall defense.

When a threat is located, laser countermeasures can be employed to defeat it. Among the systems displayed at Eurosatory, only a few addressed this potential, including the Russian PAPV system, which was developed and is produced by the Russian Nudelman Precision Engineering design bureau and the DHY322 laser countermeasure system from CILAS, with. 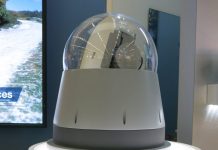