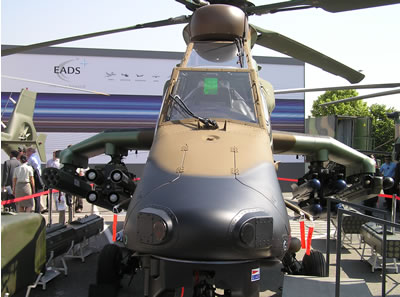 The Tiger armed reconnaissance and attack helicopter received lots of attention at Eurosatory 2006, marking the completion of one armament programs (Australia) and the beginning of at least two others (Germany and Spain). The Tiger is currently operational with the German and French forces. The helicopter was designed from the start to address the specific requirements of two nations, but since Australia and Spain decided to procure the helicopter, things are changing dramatically, primarily with the helicopter’s armament suite.

The German Tiger was designed as an integrated weapon system, optimized as a tank killer and able to rapidly engage multiple tanks at a range of 6 kilometers from safe, concealed positions. To provide these capabilities the helicopter was equipped with a mast-mounted sight and eight PARS-3 (Trigat LR) missiles, which were originally being considered both by Germany and France. However, since France withdrew from the TRIGAT program, the Germans also reconsidered their choice and began to look for alternatives. The Australians selected the Tiger for their new Armed Reconnaissance Helicopter (ARH) and opted to equip it with the Hellfire missile. The four years integration program was completed in June 2006 validating the integration of the M299 “smart launcher” and demonstrating the missile’s performance through six months of flight and firing tests, employing the weapon in both Lock On Before Launch (LOBL) and Lock On After Launch (LOAL) using self and remote designation. Lockheed Martin and MBDA are aggressively marketing the Hellfire as a possible solution for the French and Spanish Tigers, which might also mount the German PARS 3. Unlike Australia, which has already made its decision, the other countries are also consider a third candidate – the Israeli Spike ER.

RAFAEL has been promoting the Spike ER missile for helicopters for some time. The missile is already operational with the Israeli Army and has been integrated with the Romanian Puma multi-mission helicopter. Turkey is also believed to be interested in the missile. The first evidence that the Spike ER option is real was demonstrated at Eurosatory 2006 show, when Eurocopter presented the Spike ER on the Tiger. However, shortly after, the EADS’ subsidiary hastily replaced the missile with their parent company’s PARS 3 LR launcher pod. The Spike-ER missile has been cleared for use with the Tiger attack helicopter following the successful conclusion of firing trials during which all four missiles launched hit their targets with remarkable precision. The pilot can launch a missile and immediately drop down out of sight of the target, but can still view the target through the missile’s fiber-optic guidance link. Spike ER has a range of 8 kilometers and is available in Anti-Tank (HEAT Tandem) or Blast Fragmentation warhead versions.