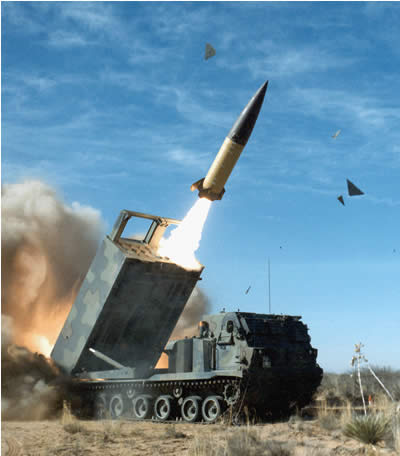 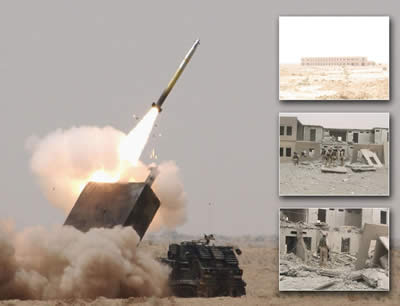 Precision fires can be employed with all types of support weapons, including artillery rockets and missiles. When rapid and decisive response is required, Guided MLRS (G-MLRS) or even Army Tactical Missile System (ATACMS) are called for action. According to a Lockheed Martin briefing at AUSA 2006, over 100 G-MLRS rockets were fired in Iraq, in support of urban combat operations.

Current artillery assets employed by the army and USMC are based on ‘statistical’ weapons, which require massive, widely dispersed fire to achieve a desired effect on the target. To compensate for the statistical error, dual purpose, improved conventional munitions (DPICM) grenades (designated M42/M46) are dispersed from the weapon (cargo projectile) to saturate the target area. While such weapons were widely used throughout all recent conflicts, since 1982, DPICM demonstrated a high failure rate, leaving many unexploded ordnance (UXO) in the field. Current efforts are underway to use “cleaner” weapons, reducing the long term post-war effects and minimizing UXO hazard to non combatants.

One solution is to replace the cargo projectile or warhead (in rockets) with a unitary warhead. This concept is pursued with Enhanced Blast Warhead (EBW), developed for the Guided MLRS system; EBW demonstrated an area effect yielding 70-80% of the DPICM effect, without the hazards of unexploded duds. EBW also has devastating, localized effects inside buildings.

Another approach calls for the improvement of the DPICM grenades, utilizing fail-safe fusing systems. ATK and IMI teamed to produce the XM242 fuses replacing the M223 fuses in existing M42/M46 grenades forming current DPICM ammunition. According to Israeli sources The IDF used cluster munitions of different types, mostly of US origin. Only part of these munitions were equipped with locally produced (IMI) self-destruct fuzes. Use of these advanced fuses could have contributed to a “cleaner” battlefield after the end of the recent hostilities, preventing the risk to explosive ordnance teams, as well as to civilian lives and properties currently experienced in the former combat area.

A different weapon pursuing the “clean battlefield” initiative is the Clean Lightweight Area Weapon (CLAW)introduced by Textron Systems. Designed to accomplish the Anti-Personnel / Anti-Material (APAM) mission, a single 64 lb CLAW munition has the footprint and effectiveness of a 1000 lb (0.453 ton) legacy cluster bomb but without the risk of UXO. Each CLAW is designed for activation in a vertical position, oriented and stabilized by a parachute and activated at a preset height over the ground by proximity sensor. Utilizing Insensitive Munition (IM) explosive material, zirconium rings for enhanced incendiary effect and fragmentation assembly, CLAW maximizes the effect against dispersed unprotected personnel, material vehicles or storage areas.

High precision attack from extended range is also the domain of ATACMS, which was also used in during Operation Iraqi Freedom (OIF). ATACMS also started as an area saturation weapon but with improved guidance transformed into precision attack weapon. Between Operation Desert Storm (1991) and OIF the missile’s warhead was reduced, trading off some DPICM capacity for navigation and guidance hardware, enabling extended range and improved precision. During and after OIF, some 450 ATACMS were fired in Iraq, primarily against air defense and infrastructure sites. Missiles are fired from M-270A1 MLRS and HIMARS launchers. Since the missile can be launched from hundreds of kilometers away, it retains an element of surprise, maximizing the effect on target with a massive, localized strike.

Lockheed Martin is currently producing Block 1A missiles to replenish depleted stocks, under a US$47 million order by the U.S. Army. One of the unique characteristics of the missile is its steep attack angle, resulting in a wide area fragmentation pattern, compared to standard rockets which follow ballistic trajectory and have non-optimized oblique terminal approach. A new version is a currently developed for deep penetration attacks, targeting deeply buried command posts and WMD facilities.

To improve the precision effect of tube artillery, ATK is offering a simple but effective upgrade to the artillery munitions, introducing a Precision Guidance Kit (PGK) embedded into the fuse assembly of conventional projectiles. The kit uses a fixed canard design, which does not require complex activation or deployment of actuation. ATK claims the new guidance system will be able to reduce the calculated error point (CEP) below 20 meters (x10 time’s advantage over unguided artillery). The system will enable existing artillery to be used effectively against point targets, utilizing unitary warheads, rather then DPICM.

Recent improvements made to mortar systems improved their accuracy and rapid response, thus becoming an effective weapon for modern asymmetric warfare. Operated at battalion level, 81 and 120mm mortars provide close fire support for troops, deploying smoke screens, illumination and precise lethal effects, utilizing computerized ballistic calculation for aiming and targeting. Soltam and Honywell have both displayed advanced mortar system improvements. With hundreds already supplied to the U.S. Army Stryker Brigade Teams, Soltam is now offering these capabilities to light and air-mobile users and Special Forces. The company demonstrated a new concept of a lightweight Cardom system, mounted on a trailer towed by a HMMWV. The system weighs 4,400pounds (2,000 kg) and can be airlifted by small transport aircraft and helicopters. It can accommodate 81mm or 120mm barrels, replaceable at field level. Honeywell displayed the computer control and navigation system employed with the 120mm mortars, utilizing the Talon Inertial Navigation System.