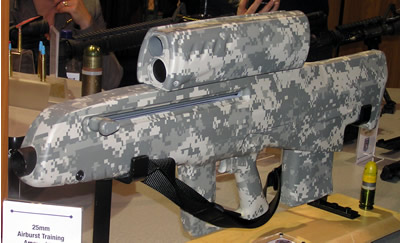 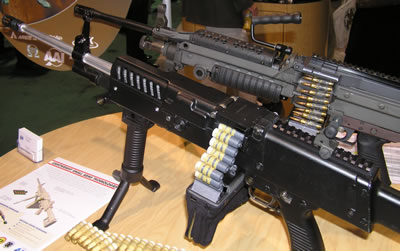 A few months ago, at Eurosatory 06, AAI displayed a model of the future Lightweight Small Arms Technology (LSAT) machine gun, under development as an Army Technology Development initiative since 2004. At AUSA 2006 AAI unveiled the machine gun prototype, and the unique telescoped and caseless ammunition designed for the system.

The key objectives of the LSAT program are to reduce the weight of weapons carried by infantrymen by 35% and lessen the weight of ammunition by 40% while maintaining or improving lethality and reliability over current weapons.

XM25 Individual Airburst Weapon System is currently under development and intended to address the capability gap of defeating defilade targets. The weapon has the capability to hit point targets at a distance of 546 yards (500 meters) and area targets at 765 yards (700 meters). 25mm munitions currently in development include High Explosive Air-Burst (HEAB), armor piercing, door breaching, anti-personnel, and two types of non-lethal munitions – blunt and agent dispersing airburst. At AUSA 2006 the XM116 sight was displayed by L3 (Formerly Brashear). Two additional types of support weapons currently under development are the XM-307 25mm Advanced Crew Served Weapon which will use the same 25mm ammunition as the XM25. It will also have a lightweight machine gun derivative designated XM-312 firing standard and enhanced 0.50 Caliber (12.7mm) ammunition.