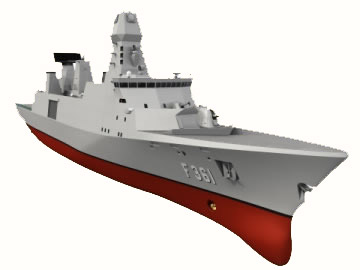 The Royal Danish Navy will receive three Anti Air Warfare (AAW) suites for the new frigates planned for the Danish Navy. Each system consists of the APAR Multifunction Radar, a SMART-L Volume Search Radar and a Fire Control Cluster. Similar systems are already operational with German and Dutch navy frigates. The new frigates, each displacing about 6,000 tons, will be built by the Odense Steel Shipyard Ltd. in Denmark. The vessel will be 138.7 meter in length, and beam of 19.8 meters. The three ships are scheduled to be handed over to the Royal Danish Navy and replace the Niels Juel class corvettes between 2011 and 2013.

APAR multifunction radar is configured as an active phased array radar, operating in the I band, performing various tasks simultaneously, including automatic detection and tracking of low altitude targets (e.g. sea-skimmers), detection and tracking of air targets and the support and guidance of a wide range of missiles. The complete APAR multifunction radar consists of 4 faces covering 360 degrees of possible threat. 3,424 Transmit/Receive elements are installed in each of the four arrays, providing a powerful and redundant system architecture. Interrupted Continuous Wave (CW) illumination (ICWI) is a built-in feature of the APAR system, designed to cope with the terminal guidance requirements of SM-2 and ESSM missiles. APAR is the result of a tri-national development, led by Thales Netherlands, involving governments and industries from the Netherlands, Germany and Canada.

SMART-L is a long range 3D volume search multibeam radar system operating in the D band, capable of automatic detection, track initiation and tracking of up to 1,000 air targets, up to a range of 400 km. Its performance has already been tested and proven to be capable of detecting stealth targets in land clutter environment. The AAW suite will have growth potential to offer Tactical Ballistic Missile Defense. Such capabilities, particularly those of the SMART-L radar have already been demonstrated with Royal Netherlands Navy frigate participating in recent US Navy TBMD tests near Hawaii in November and December 2006.