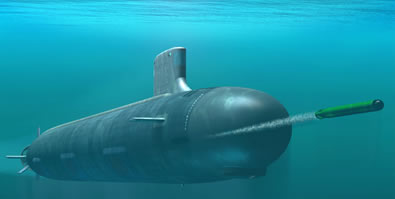 General Dynamics Electric Boat delivered the latest Virginia class submarine to the U.S. Navy, ahead of schedule on December 22, 2006. Hawaii (SSN-776) is the third ship of the Virginia Class, the US Navy’s first major class of combatant ships designed for operation in both littorals and the open oceans.

The Virginia class submarine has one of the most advanced torpedo delivery systems in the fleet. In addition to torpedoes, the Virginia-class will be armed with Tomahawk cruise missiles and has been designed to host the Advanced SEAL Delivery System (ASDS) and Dry-Deck Shelter to support various missions.

Electric Boat and Northrop Grumman Newport News have received contracts to build the first 10 submarines of a planned 30-ship Virginia Class under a teaming agreement that splits the construction workload between the two shipyards. Three submarines completed construction and are undergoing sea trials – SSN-774 Virginia, SSN-775 Texas and most recently, SSN-776 Hawaii. SSN-777 North Carolina is currently under construction at Newport News.

Lockheed Martin is developing a Low Profile Mast sensor system for the submarine. The new sensor mast is designed for open sea and littoral operations, decreasing counter detection probability. The mast has a sensor package including an electro-optical system which integrates a compact periscope mast, an electronic support measures system and an advanced imaging system. All packed in removable assembly which can be installed on a submarine when required to support operations and removed at the completion of the mission. The system will be delivered to the U.S. Navy in 2008. The total contract value with all options exercised could be $70 million dollars. Lockheed Martin facility in Syracuse, NY will develop the system with other industry teammates including Kollmorgen a specialist in periscope systems; ArgonST specializing in electronic warfare components; and Optics 1, which will provide advanced image sensor engineering.

Kollmorgen Corporation, Electro-Optical Division has been awarded US$17.5 million to exercise an option for the production of nine Integrated Submarine Imaging Systems (ISIS). ISIS provides an all-weather, visual and electronic search capabilities for SSN 688, SSN 21, and SSGN Class submarines.