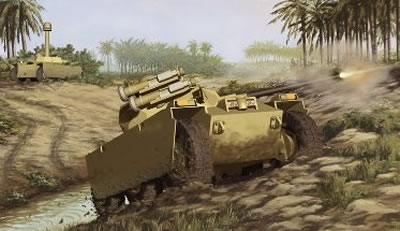 In an attempt to balance between sustaining the current force, and equipping the future force, the U.S. Army is restructuring and stretching the “Future Combat Systems” (FCS) program, eliminating $3.4 billion from its budget over the next five fiscal years. These savings were achieved by stretching the fielding of the 15 brigades over five years, starting 2015 and eliminating or deferring four systems from the 18 planned, including the Class II and Class III UAVs, the Armed Robotic Vehicle (ARV) and Intelligent Munitions System (IMS). Total cost of the restructured program is expected to be $162 billion with another $2 billion slated for additional construction required. The FCS was designed as a “family” of 18 individual systems, plus the network and the soldier — referred to as 18+1+1. With four of the systems deferred, the system is now 14+1+1.

Most significantly, the changes call for stretching the fielding of the 15 FCS brigade combat teams from over a 10-year period to 15 years. The fielding for the first is slated for fiscal 2015. This will reduce costs by roughly $700 million. Army Maj. Gen. Jeffrey A. Sorenson, deputy for acquisition and systems management, told Pentagon reporters. Sorenson said that, despite the cuts, FCS remains the largest modernization program for the Army. He said that the program is on time, on cost and still the No. 1 priority of Army leadership.

Besides reducing costs, the changes will deliver future technologies into the hands of troops in the fight quicker, Sorenson said. Since 2005 the FCS program was restructured with “spin out” strategy, enabling rapid fielding of elements of the FCS family, instead of waiting until the complete system is fielded. This strategy will enable the fielding of Unmanned Ground Systems (UGS) and part of the network by fiscal year 2008. The network, which will enhance battle command capabilities, will be available as much as two years earlier under the restructuring.

All four systems eliminated from the FCS programs are unmanned systems. These include the Class II and Class III unmanned aerial systems (UAS), which were considered to be low priority for some time, the Armed Robotic Vehicle, considered to be the largest and most expensive system among the FCS Unmanned Ground Vehicles family, and the Intelligent Munitions System (IMS), an array of unattended, autonomous and remotely controlled weapons designed to enable warfighters to remotely dominate an area by selectively denying movement and enemy activity.
While these systems are eliminated, some of the fund savings will be diverted to increasing procurement of the remaining systems, such as Honeywell’s Class I mini-UAV and Northrop Grumman’s Class IV FireScout. The funds saved by the deferred ARV will be allocated to larger procurements of other, smaller UGVs. The ARV included two types of vehicles. Apparently, both will be shleved for some time. The IMS program was separated from FCS. The systems currently being contracted will be fielded. Elimination of IMS will, however, require investment of released funds into other sensors in the program.

Companies affectd by the decision could be Textron Systems, a Textron Inc. company (NYSE:TXT), the prime contractof for the IMS program, and BAE Systems, which was involved with the ARV. However, both companies are heavily engaged with other elements of the FCS program. For example, Textron Systems is also pursueing the FCS-UGS system which should receive more focused resulting from the elimination of IMS. Honeywell (NYSE: HON) which was working on a candisdate for Class II UAV, Piasecki Aircraft Corp. and Aurora Flight Sciences, which was working on models for bot classes. Companies about to gain from the new plan are Honeywell, which could get increased orders for its mini-UAV (Class I) and Northrop Grumman (NYSE: NOC), which could get a larger share for its Class IV (Fire Scout).