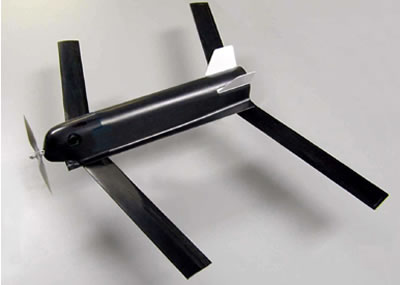 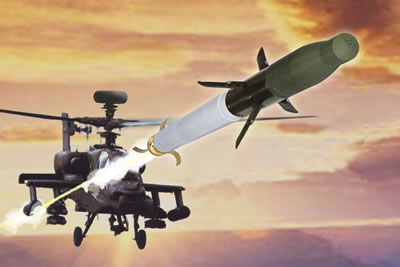 The introduction of remote video links, enabling operators to monitor the UAV’s payload view in real time, enables users to employ weaponized UAVs more flexibly and with improved confidence. Network enabled systems employing distributed command and control elements, with Intelligence, Surveillance and Reconnaissance (ISR) and armed airborne assets (either separate platforms or integrated into a single unit) benefit from progress made with UAVs and precision guided weapons. Typical weapons which could be adapted for UAV use include the Israeli LAHAT, designed by IAI subsidiary MBT to meet requirements of the Israeli armored corps. As early as 2004 this weapon was proposed for testing with US Hunter UAVs. Lahat utilizes the semi-active laser homing guidance method to accurately home in on targets from a distance beyond 10 km. Fitted with a shaped charge multi-purpose warhead, LAHAT can engage targets marked by laser designator mounted on the launching platform or by an indirect designation, from another unit located closer to the target. Each missile weighs about 13 kg and a complete launcher, with the four missiles weighs only 75kg, significantly less than any alternative weapon.

The laser Guided SPIKE was developed by the Weapons Division of the Naval Air Warfare Center, US Navy, with assistance of DRS Technologies. Originally designed as a man-portable weapon for the Marines and the Navy’s special operations force, Spike fills a critical niche for a low-cost, lightweight guided weapon for U.S. ground forces. It is also considered for tactical unmanned aerial vehicles and a force-protection weapon to defend surface ships from small-boat swarms or light aircraft. The missile uses Semi-Active Laser (SAL) seeker to engage laser designated targets from a distance of two miles. Each Spike missile weighs 5.3 lb (2.5 kg) and is 25 in. 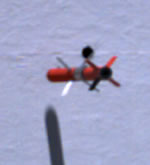 ( cm) long. The missile performed its first controlled flights in 2005. Spike missile is designed to be used on medium and lightweight UAVs. The missile has already been tested with the DRS Sentry HP drone at Eglin AFB, Florida, as part of US Air Force UAV Battlelab evaluation.

Another type of lightweight weapon considered for UAVs is the 2.75″ Hydra 70 rocket. In 2005, four 2.75-inch rockets were fired from Vigilante Unmanned Aerial Vehicle (UAV) testbed, demonstrating the weaponization potential of rotary wing UAVs. The tests evaluated the stability and flight control flight control adjustments necessary to compensate for excessive loads during the weapon’s firing. On these tests the Vigilante was controlled from a nearby UH-1 manned helicopter. Such tests will provide important data for the integration of Advanced Precision Kill Weapon System (APKWS II) with future rotary wing UAVs. APKWS II is intended to fill an aviation systems weapons gap between the Hellfire Missile and Unguided Hydra-70 2.75-Inch Rocket, introducing an affordable, lightweight, precision aerial guided rocket APKWS II weighs about 13 kg, integrating strap-down laser seeker (fixed in the wing roots) and guidance section onto the Hydra-70 Rocket, it will be effective against soft and lightly armored targets as well as urban operations. In April 2006 BAE Systems was contracted for the two year $45.7M system design and development phase, teamed with Northrop Grumman and General Dynamics. Production is expected to begin in 2008. The new design uses existing or new production rockets, fitted with a mid-body guidance approach that employs BAE Systems’ Distributed Aperture Semi-Active Laser Seeker (DASALS), the same element is also used in the Army’s Precision Guided Mortar Munitions Program. APKWS II will utilize the Hydra Universal Rail Launcher (HURL), a lightweight four-rail launcher originally developed for the Comanche attack helicopter but modified for use with UAVs. Designed as a ‘smart rocket launcher’, HURL can be linked to on-board avionics through Mil-Std-1760 and Mil-Std-1553 interfaces. Lockheed Martin also developed a version of 2.75″ laser guided rocket called Direct Attack Guided Rocket (DAGR) designed to be fully compatible with the Hellfire II system and 229 smart launcher system, therefore increasing the launcher load-out by up to four times. The rocket was flight tested in February 2007 and is expected to complete testing in 2007. The Russian company Basalt is offering the TBG-29 rocket propelled weapon, loaded with thermobaric warhead, to equip light aircraft and UAVs operating in close support operations. The weapon is designed to annihilate troops on open terrain, in trenches, field shelters, and inside buildings and destroy lightly armored and soft skinned targets. The round is fired from grenade launchers (RPG-29 and RPG-29N). Aircraft, helicopters or UAVs with a maximum takeoff weight of 1,000 kg or higher which can also carry the multiple launch rocket systems loading up to 7 rockets each. The 105mm diameter rocket measures 695mm in length, and weighs 6.7 kg. It can be fired at targets ranging from 50 to 2,000 meters. In enclosures, the thermobaric charge is effective within a volume of 300 square meters or at a radius of 10 meters from the detonation point, in open terrain. When fired near windows gun-ports etc, the detonation will kill any person within one meter from the detonation point or two meters, when fired at troops in trenches.

Switchblade is another weapon, developed by AeroVironment, Inc. It is designed for hand, tube or aerial launch, and could provide the warfighter with a “magic bullet” delivering ‘instant’ Intelligence, Surveillance and Reconnaissance (ISR) on Beyond Line-of-Sight (BLOS) targets within minutes. Designed as an expendable system, Switchblade will also have an option to carry a small explosive charge to enable rapid prosecution of selected targets. The miniature, remotely-piloted or autonomous platform can either glide or propel itself via quiet, electric propulsion, providing real-time video for information gathering, targeting, or feature/object recognition. Read additional parts of this article: