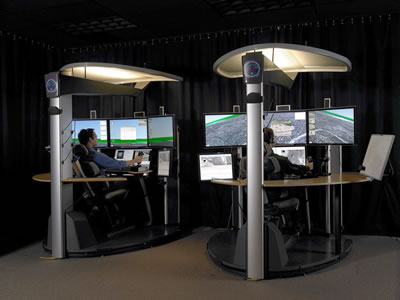 When employed in constellations of coordinated and interconnected multiple vehicles, UAVs offer much improved efficiency compared to current systems concept of operation. Multiple tasks can be dynamically allocated between the constellation’s platforms, assigning the most suitable sensor for every user and target; furthermore, several sensors can be harnessed to focus on a single, high priority target, ensuring continuous coverage under all visibility conditions, viewing the target from different angles and altitudes. The constellation also offers inherent redundancy, automatically arranging to back-up any sensor which fails, due to logistical (return to base), technical or operational circumstances (shot down). Such constellations are even more critical for weapons employment, since the position of each weapon carrying platform can be dynamically computed to ensure that any ‘time critical target’ within the area under surveillance could be engaged within the required response time by one or more weapons.

Other area domination concepts, currently under development consider the deployment of persistent constellations of network-centric intelligent munitions. Each micro-platform will be fitted with a weapon datalink, feeding real-time video and Laser Detection and Ranging (LADAR) imagery, area surveillance and targeting and real-time Battle Damage Assessment (BDA) from the battlefield, over the Global Information Grid (GIG) to forward command and control centers. Unlike LOCAAS, these vehicles will be designed for multi-kill capability, and operate over open area as well as urban environment. Further evolved systems expected to be fielded toward 2030 will be optimized as layered systems, offering Total Urban Dominance Layered Systems (TUDLS) integrating various systems operating at different altitudes to dominate the vertical dimension denying enemy operations in all environments. These systems will be equipped with compact, directional and focused lethality warheads, featuring variable yield and advanced energetics, with sensors capable of locating camouflaged targets in cluttered terrain (urban) reducing collateral damage and minimizing risk to friendly forces.

Persistent UAV constellation currently evaluated by the US Air Force is developed by Boeing, using low-cost expendable system called Dominator. It is designed for deployment from stealth bombers and fighters (such as the B2 or F-22), at the starting phase of a conflict, to dominate key battlefield areas with persistent unmanned, highly autonomous yet fully controllable constellation of aerial sensors, weapons and support elements.

The system will provide the air force with persistent battlefield presence, maintaining offensive capability against time sensitive targets and mobile targets in more immediate form. It enables target tracking and requires ‘permission to attack’ in an accelerated fashion. The program is evaluating various options for carriage, and fast aerial release of Dominators. The first flight of the Persistent Munition Technology Demonstrator (PMTD), a testbed for future unmanned air-domination vehicles was made in April 2006. The 60 pound vehicle has a wingspan of 12 feet was used to demonstrate the autonomous flight capabilities. Future tests will include sensor integration and enhanced weapon terminal guidance demonstrations as well as possible in-flight refueling and munitions dispensing.