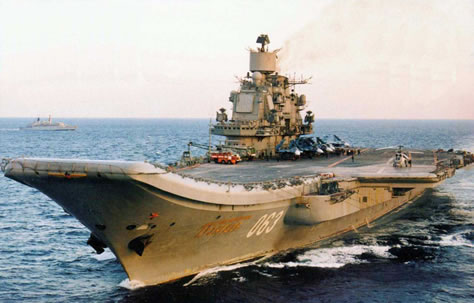 By 20 August 2008 Moscow is flexing its muscles again in the eastern Mediterranean, and aims to reactivate old cold war naval installations with its ally, Syria. President Bashar Assad, on his way to the Kremlin to finalize what looks to become a high profile deal invited Russia to position surface/surface missiles on his land in response to US deployment of missile interceptors in Poland. The Russians have sent their only aircraft carrier “Admiral Kuznetsov” from its home base in Murmansk, towards the Mediterranean and the Syrian port of Tartus. The mission comes after Syrian President Bashar Assad said he is open to a Russian base in the area.  The Admiral Kuznetsov, part of the Northern Fleet and Russia’s only aircraft carrier, will head a Navy mission to the area. The mission will also include the Black Sea fleet flagship, the missile cruiser Moskva, and several submarines.

On December 2007 Russia launched their frist north sea flotilla to the Mediterranean, to demonstrate its military strength. It was when Russian President Vladimir Putin alarmed Europe by finally declaring Russia’s official rejection of the Conventional Armed Forces in Europe Treaty (CFE), (the treaty entered into force on July 17, 1992 limiting the number of combat elements that Russia could deploy along its borders with Europe). Immediately following this declaration, Russian Defense Minister Anatoly Serdyukov announced sending a sortie of six Russian warships to the Mediterranean, led by the Admiral Kuznetsov aircraft carrier. Other vessels escorting the carrier as part of the task force are Admiral Levchenko and Admiral Chabanenkoanti-submarine ships, and the Sergei Osipov and Nikolai Chiker support ships. The group is expected to be joined by the flagship Moskva a guided missile cruiser and four additional ships as it arrives in the Mediterranean.

This will be the first prolonged stay of a Russian carrier to the eastern Mediterranean in waters dominated with regular patrolled by the US Sixth Fleet and in vicinity of Israel’s shores. On its decks Admiral Kuznetsov carries 47 warplanes (mostly Su-33) and 10 helicopters. The Russian Black Sea Fleet contingent, which has already set out for its new mission from Sevastopol, will rely on the naval facilities at Syria’s Tartous port. Its presence for several months will be a complication for the Israel navy’s operations opposite the Lebanese and Syrian coasts, especially if the Russians could be joined at Tartous by Iranian extended Kilo class submarines armed with the Russian-made “Sizzler” Klub-S (3M54) missile, as some unofficial Israeli sources reported. The Rusian Kuznetsov carrier group will conduct three tactical exercises, including real and simulated launch of missiles, said Serdyukov, adding 11 port visits are expected to be made.

Update – January 20, 2008: Following last week’s joint exercises in the Mediterranean, the Russian naval strike group joined the Moskva missile cruiser, which left Sevastopol on January 12. The group is expected to conduct an exercise in the Atlantic Ocean, beginning January 20. The two months mission is expected to end early in February. “After this visit to the Mediterranean and France, the first in 15 years, we will establish a permanent presence in the region,” Vice-Admiral Nikolai Maksimov said.

Last week, the group was split into two elements which performed joint naval exercises with the Italian and French Navies. The Russian and Italian navies practiced rescue and counter-terror operations. The two Italian vessels participating in the drill were the Frigate Espero and Bersagliere. Following the exercise part of the Russian flotilla sailed to the French naval port of Toulon, for a short rest. Their Mediterranean voyage will continue on January 17th as the elements from the Northern Fleet under the command of Vice Admiral Nicholas Maximov, will be joined by the Black Sea Fleet flagship, missile cruiser Moskva, which left Sevastopol on the 13th. The Moskva is commanded by the Vice-Admiral Vasily Kondakov, Deputy Commander of the Black Sea Fleet. As with their Italian counterparts, the French Navy is planning to hold naval exercises with the Russian visitors.

Sending such powerful Russian warships onto the Mediterranean, for any amount of time, is no small matter. With the Mediterranean having been a “NATO lake” for the past 15 years, since the demise of the Soviet Union, the simple presence of a naval Russian force will require reviewed strategy and tactics of many of western and Israeli navies.

But making matters even more complicated for NATO, the Kremlin has also decided to send a sortie of warships to the northeastern Atlantic. No less that eleven vessels from the Northern Fleet have set sail on a range of voyages that will cover much of the globe. Extending to more than 12,000 miles they are scheduled to enter ports of six countries in 71 days.

In the latest twist to worsening East-West relations, NATO submarines and surface ships, which may include Royal Navy vessels, are already engaged in trying to gather information on the new Amur stealth class boat, being secretly tested by the Russian Navy in the Baltic. Adding to this greater-than-normal scrutiny effort is in part, a response to Russia’s recent decision to resume long-range bomber flights close, or even penetrating into NATO airspace, which has revived memories of Cold War confrontation between the two blocs. In fact, twice during last summer, Russian Tu-95 Bear nuclear bombers have been spotted heading towards British airspace off Scotland, prompting the RAF to send fast reaction interceptors to head them off.

The prospect of Russia reactivating its cold war naval bases in Syria’s Tartus and Latakia ports, could have a most dramatic strategic impact. High-profile air defense missiles and surveillance systems deployment around any Russian-manned installations in Syrian ports, might also shift the military balance to Israel’s disadvantage, or even threaten a clash between Israel and Russian forces, as happened during the later stages of the so-called War of Attrition in 1970, along the Suez Canal.

The Russian Black Sea fleet’s 720th Logistics Support Point at Tartus has been in disuse since 1991, when the Soviet Union imploded. Yet it remains the only Russian military base outside the post-Soviet Commonwealth of Independent States territory. Last year Russia reportedly dredged Tartus and began building a new dock at Latakia.

Israeli analysts believe that the present and rather unprecedented Russian strategic decision – sending such an impressive naval sortie into the eastern Mediterranean – could have resulted from Israel’s still mysterious foray into Syrian air defense, during the air strike on an alleged nuclear development or weapon assembly site. According to Aviation Week – who interviewed the retired Brigadier General Pinchas Burchris, director general of Israel’s Ministry of Defense, before the Israeli fighter aircraft ingress, a main Syrian radar site was struck with a combination of electronic attack and precision weapons, causing complete black-out of the entire Syrian air defense system which relied exclusively on Russian produced and installed equipment. Aviation Weekclaims this event may have been one of the first examples of offensive and defensive network attacks that included higher-level, non-tactical network penetrations.

No precise information, nor confirmation of the AW&ST report was released by Israeli official authorities, but the very fact that non-stealth jet fighters managed to enter unscathed into the highly sophisticated Russian supplied air defense barrier, built painstakingly during decades, since the 1973 Yom Kippur War, speaks for itself. It certainly must have caused Moscow considerable embarrassment, over the lack of performance of their latest sophisticated air defense systems sold for hard cash to Mid Eastern Muslim nations.

But not embarrassment alone, painful as it was, could have triggered Moscow to such a rapid reaction. The Russian navy is under growing pressure from Ukraine to withdraw the Black Sea Fleet from its traditional deployment at Sevastopol by 2017. Some recent incidents has sharpened this into, sofar minor, clashes with local elements, but the warnings are out in clear: “get out – you are no longer wanted here”!

The ‘Kiev Post’ noted that the Black Sea fleet’s lease on its Sevastopol base is “hostage” to Ukraine’s volatile relations with Moscow – which will expire in 2017, necessitating a renegotiation or withdrawal. The Russian Black Sea Fleet base already boosted security at its navigational facilities, amid a dispute with Ukraine authorities, over a lighthouse, linked to the fleet in the Crimean city of Yalta. The Russian move came after Ukraine threatened to take over all the navigational facilities of the Black Sea Fleet. The dispute emerged when the staff of a Ukrainian state company seized the lighthouse and denied Russian servicemen access to the lighthouse.

All this would render the Syrian ports invaluable for an alternative naval base, provided that their security could be assured, by a viable air defense barrier, safeguarding them from any future Israeli, or US attack, or even surveillance activities. Bolstering such an air defense can be enhanced by the long-term presence in off-shore deployment of high-profile warships, mounting sophisticated airpower (Su-33 fighters) and air defense armament, such as the Admiral Kuznetsov‘s 3K95 Kinzhal missile system, the navalized version of the TOR and the Slava class Moskva‘s SA-N-6 Grumble navalized version of the S-300 (SA-10).

Another aspect of the new Russian Med deployment is intelligence. Israeli electronic warfare experts warn that the presence of a strong Russian naval force, most likely based in the Syrian port of Tartus, would represent a significant strengthening of Russian intelligence gathering capabilities in the region. The Russian navy is considered to have high-quality electronic equipment capable of observing new weapons systems and intercepting communications, which could become high-value assets to Syria and Iran. Russian intelligence maintained constant presence for several decades in international waters, where listening ships, camouflaged as fishing boats were positioned continuously off the Israeli coast, gathering electronic and communications. This activity continued at least through the 1990s.

Whatever the latest Russian foray might signal, one thing is clear, the Mediterranean will soon become a new ‘Cold War’ type contest between Western and Russian navies, which will heat up substantially once the new Russian fourth generation Project 955Borey class submarines, armed with Bulava missiles also enter into the fray.