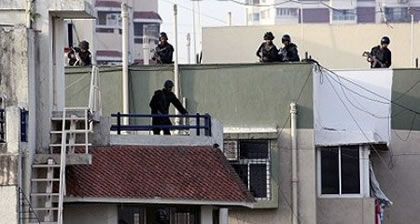 Welcome to the age of “Urban Mega Jihad”!

The Mumbai attack shows a quantum leap in the quality of terrorism, in fact, emerging from the notorious “suicide bombers”, the new urban Islamic terrorist is not much different from a well-trained elite forces commando.

It’s aim, was to create an impressive show of force in the framework of militant fundamentalist Islam’s war against what it views as corrupt Western culture According to Indian born Dr Rohan Gunaratna, an international expert on al-Qaeda, claims that the tactics and methodology of the Mumbai attack is almost certainly in al-Qaeda style, targeting high-profile objectives, which create immediate world-wide media headlines.

An attack of this magnitude cannot be thrown together overnight. It requires planned, scouting, financing, training, and a support by on-site reconnaissance and a locally established network to aid the fighters on site during the attack.

Reports indicate at least two of the assault teams arrived from outside the city by sea. US counterterrorism officials mentioned that there was strong evidence that Lashkar-e-Taiba had a “maritime capability”. Although a little-known group calling itself the “Deccan Mujahideen”, originating in Hyderabad, a mainly Muslim southern Indian city, has been mentioned, it seems quite certain that the multi-headed hydra of Islamic extremist cells, supported by the hardliners at the Pakistani intelligence service and based in Pakistan and Kashmir, are among the perpetrators. In fact, Deccan Mujahideen may be a front for the Islamic terrorist organization Lashkar a-Taiba (“army of believers”), established in 1989 by the Pakistani Inter-services Intelligence (ISI) itself.

According to US intelligence officials, the hardline ISI has had an indirect but longstanding relationship with Al Qaeda, turning a blind eye for years to the growing ties between Osama bin Laden and the Taliban. It was heavily penetrated by Islamic extremist groups, such as Al Qaeda and Taliban, to mention just a few. According to well informed intelligence sources, no one really knows who is who in his allegiance: to the Pakistani national flag or the Islamic Jihad banner!

As usual, whenever an Islamic terror attack is involved, in recent years, one is immediately searching for an Israeli, or at least, Jewish angle. So whether Lashkar or other Islamic groups are involved, it is quite obvious that these terrorists knew who they were targeting in Mumbai.

Nariman House in Colaba is the Mumbai headquarters of the ultra-orthodox Chabad-Lubavitch movement of Hasidic Jews, centered in Crown Heights Brooklyn NY. It is widely known around Mumbai City for its Jewish and Israeli activities.

So assuming the attackers were indeed Islamic terrorists, Israelis were a deliberate and even prime target and certainly not a chance encounter, as some reports indicated.

The well known Mumbai’s Chabad House is a popular stop for Israeli tourists, especially youngsters, who seek adventures after their military service. By attacking Nariman house, the Jihadists achieved immediate results for their highly ambitious attack: It sent shock waves through the worldwide Chabad community, reverberating all over media headlines, just as they intended. The group set up a crisis center at its world headquarters in Brooklyn, establishing contact with all their agencies over the world.

High profile Islamic terror attacks were also in the past directed against Israeli and Jewish targets. To mention just a few of the more dramatic ones, In July 1994 Hezbollah, supported by Iran, bombed the Jewish Center in downtown Buenos Aires, Argentina, killing 96 people, mostly Jews. In November 2002 fifteen people were murdered by al-Qaeda terrorists in a Mombassa hotel frequented by many Israelis. The terrorists also attempted to shoot down an Israeli airliner with shoulder fired rockets, but fortunately failed to hit it.

It is too early to draw any conclusions on the Mumbai attack, but a highly explosive situation can develop if not calmed in time before it gets out of control. If the Indians believe this was indeed Lashkar-e-Taiba and Al Qaeda, as they are suggesting, we could see a crisis developing fast, like 2002 with enormous pressure to do something. There are already first mass demonstrations in Mumbai’s streets, which could escalate into larger anti-government riots all over the entire country.

Although the new president of Pakistan, Asif Ali Zardari, has gone further than any previous Pakistani leader in saying they want to improve relations with India, Indian prime minister, Manmohan Singh, who in the past has been relatively moderate in his approach to Pakistan, sounded a harsh tone, when he mentioned without being specific Pakistani involvement. He said the attacks probably had “external linkages,” and were carried out by a group “based outside the country.

One should only be reminded of the attack on the Indian Parliament in New Delhi in December 2001, which India blamed on a jihadist group, Jaish-e-Muhammad, but accused Pakistan’s Inter-Services Intelligence having backed the operation. For the next year the two nuclear armed neighbors remained on the brink of war with forces massed along their 1,800-mile border.

On a wider scope, the reconciliation between India and Pakistan has emerged as a basic tenet in the approaches to foreign policy of President-elect Barack Obama strategy. The point is to persuade Pakistan to focus less of its military effort on India, and more on the militants in its lawless tribal regions.

But whether Pakistan’s intelligence service which has waged decades of proxy war against India, using Islamic terror groups as front, will agree to such reconciliation process remains highly questionable. According to secret intelligence reports, the post- Musharraf ISI under its new chief General Ahmad Shuja Pasha is still deeply penetrated by Islamic Jihad loyalists and one can hardly expect these officers, who keep a very low and highly compartmental profile, to accept such a change of heart in their deep-seated ideology.

One thing is certain, India, Pakistan, and Afghanistan and, for that matter, the entire South East Asian region is on the verge becoming one of the most dangerous places on earth in the near future. To keep that region from pitting nukes at each other, will perhaps be Barack Obama’s first m major global challenge. Will America’s new, untested world leader wield sufficient power to deal with such an already simmering tinderbox?