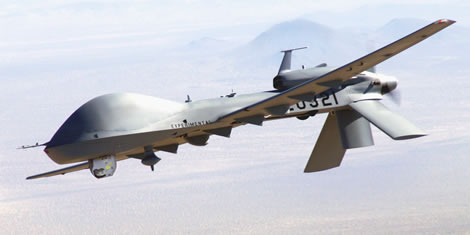 The Sky Warrior carries multiple payloads and have wing hardpoints for carriage of external stores including expendable sensors and weapons. Up to four Hellfire / Viper-Strike weapons could be carried. Unlike the US Air Force Predator, Army Sky Warriors will be configured to fly autonomously. The system will utilize the ‘One Station’, the US Army standard STANAG 4586 compatible UAV GCS also used for the control of the RQ-7B Shadow, MQ-5B Hunter and future combat system’s Vertical take-off and Landing UAV (FireScout VTUAV). The use of a common ground station offers better utilization of available assets and manpower skills. The same GCS is scheduled to fly with the US Marine Corps Pioneer tactical vehicles in early 2006.

The US Army plans to field up to 132 Sky Warrior UAVs with 11 divisions, the first unit to be equipped is the 82nd combat aviation brigade based in Afghanistan. Each of the 11 units will include five ground stations and up to 12 aerial vehicles. GA ASI is currently contracted to deliver 17 aicraft and 7 ground stations.

The Sky Warrior will be operating in Reconnaissance, Surveillance and Target Acquisition (RSTA) and command, control, communications and intelligence (C3I) system. The new UAV will operate at ranges of 200 nautical miles and an altitude of 29,000 feet, carry an internal payload of 575 lbs (261 kg)and additional external payload of 500 lbs (227 kg), able to remain in position for over 30 hours. The US Army is planning to field an advanced UAV which will assume some of the roles currently performed by the Air Force’s Predator.

Based on the familiar Predator A platform, Sky Warrior is equipped with advanced triple-redundant avionics derived from the latest Predator B. Improved avionics also include Tactical Common Data-Link (TCDL) supporting over the horizon (SATCOM) and line of sight links data relay and redundant, automatic take-off and landing system.

The UAV uses an MTS class multi-system E/O payload for day and night observation, and Synthetic Aperture Radar (SAR) with Ground Moving Target Indication (GMTI) capability to spot moving targets. Currently, these UAVs are using the Lynx system but the objective sensor is the Tactical reconnaissance and Counter-Concealment Enabler Radar (TRACER) being developed by Lockheed Martin. This radar will introduce all weather, through foliage and underground target monitoring and detection over a wide area. Apart from intelligence gathering missions, Sky Warrior will provide an airborne communications node, providing essential radio and data relay for the Warfighter Information Network – Tactical (WIN-T) battlefield network. JTRS radios to be included in the system’s standard equipment package will enable the Sky Warrior to provide communications relay to EPLRS or SINCGARS networks to support forward and isolated units located ahead of the main forces, out of ground communications reach. This service will be critical to support “blue force tracking” – a service which monitors locations and status of friendly forces. By operating as “pseudo satellite”, Sky Warrior will be able to carry out such mission without affecting its primary reconnaissance and intelligence gathering role.

Sky Warrior is currently operated by the US Army.