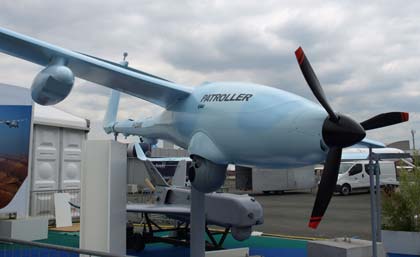 The French UAV maker Sagem has teamed with German glider producer Stemme AG to introduce the Patroller, a long endurance UAV based on a powered glider. The Stemme S 15 was first presented at the Berlin Air-Show last in 2008. In its current configuration, the Patroller is designed to perform long endurance missions, to be used in a wide spectrum of roles, from military surveillance to homeland security and maritime patrol. The unmanned Patroller will be capable of flying a 20-hour mission carrying a 440-pound payload. The aircraft carries the Euroflir electro-optical sensor payload provided by Sagem of France, and a pod mounted SAR radar provided by the German company OHB, carried underwing. Stemme is also offering an optionally piloted configuration of the drone. These aircraft are controlled through the LAPAZ flight control system and employ the Aerial Real Time Intelligence and Surveillance (ARTIS), both developed by Stemme.