King Abdullah II of Jordan warned Wednesday (July 18) that his northern neighbor Syria was on the brink of all-out civil war and that in a worst-case scenario, chemical weapons could fall into the hands of Al-Qaeda. He added that if such weapons were to fall into the hands of rebel forces – some of which he said are unknown quantities – then even reluctant UN members like Russia might support some kind of international action.

Last week’s attack on Syria’s Cabinet ministers session gravely undermined the regime’s ability to function and suppress the uprising. The toughest blow to President Bashar Assad was the killing of Assef Shawkat, who was not only the president’s brother-in-law but also the person who in practice commanded all the regime’s security arms.

Analysts warn that the blow to the regime may be so grave that Assad won’t be able to recover. Intelligence officials speak of the possibility that this was the decisive move that will prompt Assad to quit, flee or be killed, thereby leading to a cantonization of Syria – the creation of sub-national units, each of which will be dominated by a predominant sect -leading to a long period of chaos and uncontrolled sectarian bloodshed.

There is nothing new in such a trend: During the post-WWI French Mandate over the Levant, the region was subdivided into six, virtually independed and mostly ethnic populated states under general French mandatory rule. They were Damascus and Aleppo, inhabited by the Sunni majority, the coastal Alawite state, Jebel Druze (Souaida), the autonomous Sanjak of Alexandretta (1939 became Turkish Hatay) and greater Lebanon.

The small Kurdish populated enclave in northeast Syria was never recognized as a separate entity. However, should new cantonization follow Assad’s regime demise, this community could try to join Kurdish enclaves in neighboring Iraq even drawing Kurdish eastern Turkey into a long aspired Kurdish republic, a move which could have tremendous regional repercussions, presenting Ankara with a frustrating challenge. 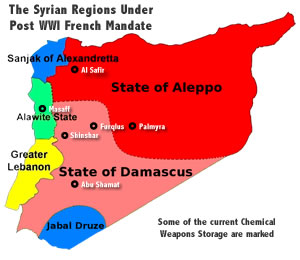 The French cantons remained virtually independent, although far from quiet, until 1936 when the French decided to unite all Syria, but keep Lebanon separate. All Syrian regimes never accepted this state of affairs and regarded Lebanon as their clear sphere of national interest.

A danger of a future return to separate ethnic cantonization marks a tremendous challenge to all Syria’s neighboring states, Turkey, Iraq, Jordan, Lebanon and foremost, Israel. There are already widespread fears that a Gaddafi-style collapse of Syria into uncontrolled chaos, could mean that dangerous weapons of mass destruction would fall into terrorist hands and spread around the globe.

For several decades, Israeli intelligence has monitored Syria’s clandestine efforts to reach strategic parity with Israel’s military potential. Fully aware of Israel’s unchallenged air superiority, Syria opted for missiles, but while these could reach into Israel, weapons of mass destruction could only achieve a strategic effect by arming ballistic missile warheads.

Syria’s emphasis has been devoted to develop a massive arsenal of chemical weapons. The first facility, which started producing such material, was named the Borosilicate Glass Project, established with aid from a German company. The facility produced dual-purpose chemicals, such as dichloro (2- chlorovinyl) arsine, a substance which is the main source of the GB Sarin-A nerve agent. Another company named Setma sprung up in the outskirts of Damascus, which imported Trimethyl Phosphate from India, under the pretense to produce organophosphate insecticide for Syrian agriculture purposes. This substance, experts know, is a precursor for the weaponization of nerve agents.

A more ambitious program was started during the 1980s, when Syria’s military patrons, the Soviet Union rendered vital information over the production process of advanced chemical warfare weapons. This brought about the development of aerial bombs containing binary Sarin-A agent. The Syrians modified the Russian ZAB-2.5 incendiary bombs to include chemical warheads, allegedly, using DF and isopropyl alcohol substances in a binary system. During the nineties, the Syrians explored new ways to develop chemical warheads of even more lethal capability. They used the ex-Soviet aerial cluster bomb PTAB-500 to modify its warhead to carry chemical weapons.
The most significant milestone in Syrian chemical weapons program was achieved when Syrian scientists mastered the development process of the notorious VX agent. Also known under the chemical name O-ethyl-S-(2-isopropylaminoethyl) methyl phosphonothiolate, VX rates among the most potent chemical weapons today. According to intelligence estimates, Syria’s strategic chemical weapons stockpile is still primarily composed of the nerve agent Sarin, but according to recent reports Syria has successfully produced the VX and that it may have tested missile warheads armed with this agent. (Check Defense-Update full report on the Syrianchemical weapons facilities.)

Recent investigations by Sky News identified four sites where chemical agents are produced: Hama, Latakia, Al Safira and the Centre D’Etude et Recherche Scientifique laboratories in Damascus. Storage sites were also found at Khan abu Shamat, Furqlus, Hama, Masyaf (Albaida) and Palmyra. As to precise locations of chemical weapons storage sites, presently updated information is scanty, due to reports that Syrian forces have been seen relocating secret weapons loads from their underground bunkers to sofar unidentified locations. No doubt, intelligence, both western, Israeli and certainly Russian, are constantly monitoring these moves by satellite and other means, but the uncertainty of the whereabouts of these highly lethal weapons must create a nightmare to intelligence agency around in the region and the world.

The ultimate solution would inevitably be to seize these depots with quick, effective and determined action by specially trained forces, located in position and high alert status to act immediately when the time is right.

Syria is not the only place in which such danger exists. The nuclear arsenal in Pakistan is one of these and the US has already a top-secret contingency plan to secure Pakistan’s nuclear depots, should Al Qaeda or Taliban try to capture these, during internal loss of control. At the Nevada National Security Site, northwest of Las Vegas, Delta Force and SEAL Team Six squadrons already practice “Deep Underground Shelter” penetrations, using extremely sensitive radiological detection devices that can pick up trace amounts of nuclear material and help Special Operations locate the precise spot where the fissile material is stored.

In an effort to keep their whereabouts away from prying U.S. intelligence efforts, the Pakistani army had recently taken to transporting nuclear warheads around the country via unmarked civilian-style vans on congested roadways. Sounds familiar to what the Syrian Army is doing these days?

So who might be best placed to go in an seize the Syrian weapons of mass destruction before it is too late? Unconfirmed reports from Washington indicate that last May, 12,000 special forces commandos spent almost a month training for the sort of scenario now presented by Syria. But where are they and how quickly can they intervene in Syria-how will the Russians react to such action?

Israel’s defense minister Ehud Barak told TV Channel 10 that he has ordered to step up intelligence preparations, monitoring every movement concerning Syrian chemical weapons stockpiles, however it seems hardly viable that an order to strike deep into Syria will be given, without creating a war situation.

Elite Jordanian special forces and U.S. Army Green Berets are training in Jordan in case they have to move to secure Syria’s chemical or biological weapons Eager Lion military exercise in Jordan. Whether the King will send such forces into Syria is also doubtful.

Russia’s role may unwittingly turn out to be helpful for those thinking about the chemical weapons stockpiles possessed by the Syrian regime.

The Russian destroyer Smetlivy was heading for Tartus port with an escort of three landing ships, who according to unconfirmed reports might carry contingents of Special Forces trained and armed for covert action. Although their primary mission, by official Kremlin reports is to to “secure the port whatever unfolds beyond its chain fenced perimeter”, it would be reasonable to expect that the Russian Speznatz would become ideal to seize the Syrian chemical weapons when give the order. Moreover, as the Russians are already in place and with excellent information available they could even get away scot free and thus save an impossible situation, which no one else can cope with. 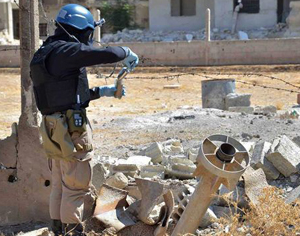