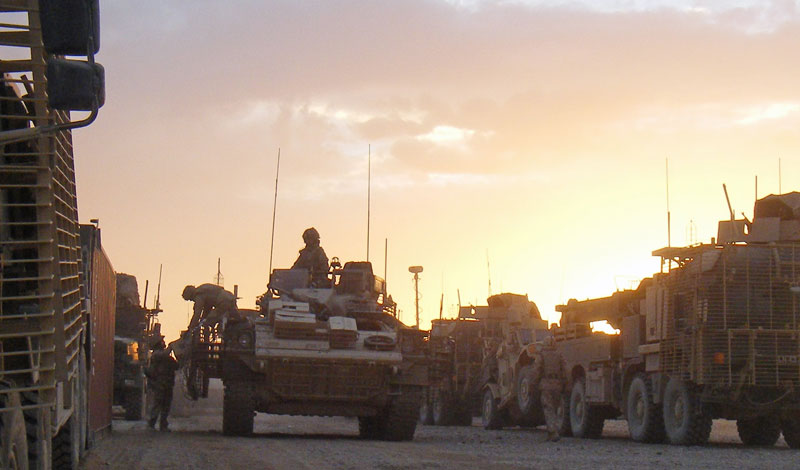 British, Estonian and Danish troops have provided a protective screen in the South Afghan desert to allow US forces to safely redeploy from bases in Northern Helmand, allowing an 180-vehicle convoy to travel 25 miles without attack. Soldiers from The Highlanders, 4th Battalion The Royal Regiment of Scotland (4 SCOTS) deployed with the multi-national Manoeuvre Battlegroup to create the safe route earlier in January 2014.

Leaving Gereshk to the bagpipe tune of Caber Feidh, played by Warrant Officer 2 (RQMS(T)) Andrew Lambert, the battlegroup moved north under blue skies and in biting temperatures. They remained out of camp for several days as the US prepared their departure from Forward Operating Bases Shukvani, Faizal and Eredvi. To keep the Battlegroup functioning over the prolonged operation it conducted rolling resupplies in the Dashte (desert). Captain Reg Gentry commanded these resupplies which have been rare on operations in the past decade.

The Manoeuvre Battlegroup, a formation of UK, Estonian and Danish troops including British soldiers from 3rd Battalion the Mercian Regiment (Staffords), is commanded by the Commanding Officer of The Highlanders, Lieutenant Colonel James Roddis MBE. He said: “On the final day of the operation 180 vehicles arranged in a three-mile long convoy moved from Shukvani to Bastion without incident. This is testament to the integrated coalition protection provided by the Afghan National Security Forces, ourselves and the Americans. “The excellent training provided in Canada at British Army Training Unit Suffield (BATUS) and the common understanding of planning procedures between ourselves and our US Partners meant that we were well prepared for the operation and coped with the cunning enemy and extreme cold.”

The operation will be of benefit to the UK later this year as Task Force Helmand prepares for the handover of Britain’s remaining bases in Helmand. Col Roddis said: “This operation provided us with an invaluable rehearsal for our own re-deployment. We will bring that confidence of having completed this operation to future manoeuvres.”

The Manoeuvre Battlegroup is the Task Force Helmand reserve and is able to operate in support of the Afghan National Security Forces (ANSF) on its flanks and to cover redeployment activities from the final bases in central Helmand.

The Highlanders, 4th Battalion The Royal Regiment of Scotland (4 SCOTS) is composed of five Companies. The Battalion is currently a Light Role Infantry Battalion, but is rerolling to become a Heavy Protected Mobility Battalion in April 2014. 4 SCOTS have previously deployed to Afghanistan in 2008 (Herrick 8) and 2011 (Herrick 14), as well as to Iraq on Operation Telic 12 in 2008.