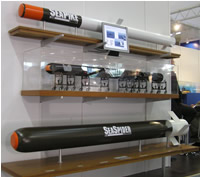 One of the most impressive weapons at the show was the Indo-Russian  Brahmos anti ship missile, designed in a ship launched, submarine launched, coastal launched and air launched versions. A different (subsonic) cruise missile was the Club-S family including the 3M-14E and 3M-54E missiles, displayed by the Russian Novator experimental machine design bureau. MBDA ALSO presented models of its leading products, including the new  Exocet MM40 Block 3, currently in full scale development. Advanced torpedoes were also presented here – two of the leading European manufacturers of Torpedoes were presented here, with full scale models of their products. Finmeccanica displayed the Whitehead BlackShark and Atlas Elektronik brought a scaled model of its heavyweight modular Sea Hake Mode 4 which is an evolutionary development the SEA HAKE heavyweight torpedo in as a standard weapon with some of the NATO navies. Other naval products on display included various countermeasures for ships and submarines, including the new SeaPike ASW weapon, and the Siren, presented by BAE.

Air defense systems were a common sight at DEFEXPO. MBDA presented two systems – the Mica VL in its land based and naval configurations, and the SAMP/T air defense system, utilizing the Aster 30 missiles. RAFAEL unveiled at DEFEXPO its new concept of “full spectrum solutions”, and chose to demonstrate these solutions with the new SPYDER integrated short range air defense system. Raytheon displayed a model of its SLAMRAAM, The company believes that the US missiles will be suitable for the planned Indian replacements of some of their air defense assets, and provide an adequate answer to an evolving threat of cruise missiles and precision attack weapons.  Contraves brought a complete system of the 35mm Skyguard equipped with the AHEAD system while Kentron was ready to discuss some aspects of its Umkhonto missile, encouraged by its success in selling this system to Finish Navy. Russian air defense systems at the show included the 9M317 (SA-11) missile presented by DRPE. This missile is used in the BUK M1-2 land based SAM and with the Naval Shtil-1 system. These missiles are providing a modern replacement for ageing systems such as the SA-6 (which is the Akash missile, locally produced in India), offering enhanced immunity against countermeasures, and effective engagement of faster, smaller targets including cruise missiles and guided weapons. KBP displayed the 9M311 missile, used in the Pantsir S1 mobile air defense system. An upgraded version of this type is also proposed with the Hermes air defense system.

Two man-portable anti tank missiles shown at DEFEXPO were the Israeli SPIKE MR/LR, and the Raytheon/Lockheed Martin Javelin. Both missiles are competing head to head in several countries, where acquisition of light weight anti-tank systems for infantry units meets priority bids. Through an attractive cooperation with local industries in Europe and Asia, Spike had a head start in Europe – in Finland, Netherlands and Poland, as well as in few undisclosed markets. The missile is also in service in Singapore and Israel. Javelin, widely fielded with the US Army and Marine Corps, won many of the recent competitions – in the UK, Norway, Australia and New-Zealand. Both Javelin and Spike are currently competing on a Canadian Army procurement program. India has yet to decide which missiles are suitable for its future programs. Raytheon sources told Defense Update that so far, Javelin has not been proposed here but the company views the region as an important market for future sales. MBDA has also chosen DEFEXPO as a stage where it previewed its Future Combat Missile System (FCMS), designed for medium and long range engagement of armored targets, by infantry and cavalry units.

Other anti tank missiles at DEFEXPO 04 included the Russian Kornet-E and the Konkurs-M anti-tank missiles. The later is locally produced in India. 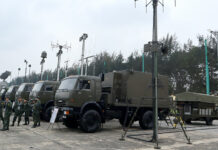