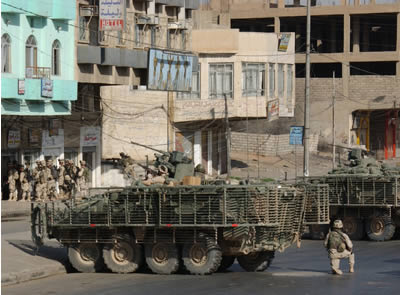 One of the most common armor formations utilized in urban combat is the box, or diamond, where several tanks and armored vehicles are grouped together to create a mutually supporting combat element. Vehicles positioned at the four points of the formation operate using slow, coordinated, forward movements, allowing time to scan areas that may be dominated by enemy forces This tactic allows them to draw enemy fire, and engage resulting targets as they are detected. When movement is halted, vehicles usually take up positions in crossroads in order to provide better observation and coverage.

Dispersion of forces is maintained by employing several box formations moving in parallel through blocks or streets and coordinating their advance and firing sectors in order to reduce the chance of fratricide. The lateral dispersion of forces canalizes the movement into well defined lines and enhances lateral security for the advancing forces. The best protected elements (tanks or armored bulldozers) are positioned in the vanguard, to engage targets in the forward sector and low elevation targets on the flanks. Armored Infantry Fighting Vehicles (AIFV) cover the flanks, high and low, and the rear. High angle fire from machine guns and automatic cannon can be used to engage threats on rooftops and in dead zones. Where AIFVs are not available, self propelled air defense guns can be used (such as M-163 Vulcan, Gepard, or ZSU-23/4).

Combined formations of tanks and AIFVs have superior maneuverability and mutual coverage, partly because of the additional capabilities of the smaller, and more maneuverable Bradleys. The ‘heavy vehicles leading’ formation enables the box to absorb enemy fire and IEDs while exposing enemy positions and engaging them with effective and accurate firepower. If one of the vehicles is disabled, the remaining vehicles close up around it, establishing a wall of steel that allows CASualties EVACuation (CASEVAC), recovery or repair. Care must be taken to ensure that the covering vehicles do not close up to the point where they present a lucrative point target.