The tank’s most powerful weapon is its main armament, the 120mm HV gun, but a high velocity cannon is not a very effective weapon for close-in urban combat. Current low-profile tank hulls, and especially turrets, restrict main gun elevation and depression angles, making it impossible to use the main gun to engage targets in tall buildings or low lying cellar bunkers at close range. Moreover, the high velocity gun has a long barrel, which restricts traverse in narrow streets, and makes it virtually impossible to engage targets on the flanks or to the rear once the barrel is pointed forward. These so-called ‘blind spots’ are the tank’s most vulnerable areas.


In the area of ammunition, the rounds most often carried by current tanks, APFSDS and HEAT, were designed for use against other tanks or AFVs in open areas, and suffer from severely limited effectiveness when used against short-range targets in urban terrain. Consequently, a change of deployment zone from open area to urban environment would require a pre-mission change of main gun rounds. This is a strenuous and time consuming process and exposes the crew to unnecessary risks from area fire weapons. Another ammunition change would be necessary when moving from the urban environment back to an open area.

For several years, the standard NATO tank main gun has had a bore size of 120mm. Only two types of cartridges are commonly used in these 120mm guns – Kinetic Energy (KE), such as APFSDS, and Chemical Energy (CE) such as High Explosive cartridges optimized for Anti-Tank use (HEAT). As KE ammunition is not normally suitable for urban use, tank crews have been forced to make greater use of CE rounds, previously regarded as ‘secondary munitions’. Neither CE nor KE rounds, however, are optimized for use in urban environments, where any of several types of multi-purpose munitions would be more effective.

Multi-purpose tank round designs are based on various combinations of fragmenting high-explosive charges, with limited penetration capability, and are optimized for defeating concrete structures, bunkers, walls, and light armored vehicles. Most of the available multi-purpose rounds were designed for use by the NATO standard 105mm guns, such as the British L-30 or by the Russian 105, 115 and 125mm tank guns. The German firm Rheinmetall is developing a 120mm HE projectile that is considered to be a balanced combination of AT and MP. A similar goals is being pursued by General Dynamics with the M830A1, a HEAT round fitted with fragmentation case, providing additional “MP” effect.

Some of these multi-purpose munitions are equipped with time fuses for producing airburst effects. An example is the famous flechette round, which can be used to engage several types of soft targets at various ranges with devastating effect. A modern replacement for the flechette is the XM1028 round, which can be used against hostiles attempting to climb onto buttoned-up friendly tanks and APCs. The advantage of the XM1028 is that it can be fired at buttoned-up friendly vehicles, that are in danger of arms-length attacks by hostile forces, without risking damage to the vehicle, crew, antennas or optics. In situations where restrictive rules of engagement limit the use of lethal ammunition, flashbangs or tear-gas (CS) canisters can be used.

Integral mortars (60mm under-armor mortars are built into the IDF Merkava) can also improve the tank’s ability to engage targets at high elevations and short ranges, where the main gun cannot be brought to bear. 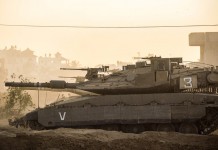