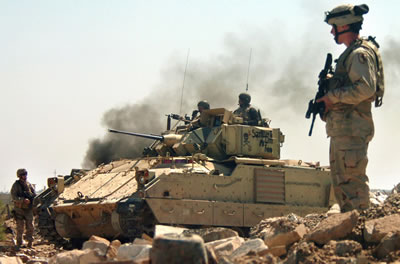 Improving a tank’s survivability has usually been achieved by upgrading its armor. Normally the best protected part is an approximately 60 degree frontal arc. This area is where hits would be most likely in a tank vs. tank engagement. In urban combat, however, threats can come from any direction. Especially vulnerable are the vehicle’s top, rear, flanks, and bottom.

The tank bottom is thin compared to most parts of the hull. Although designed to withstand a ‘normal’ AT mine explosion, the hull bottom has proven to be vulnerable to very large charges set to detonate under the tank. Examples include the destruction of Merkava Mk3s tanks by large mines in Gaza, and the highly publicized attack on a 4th ID M1A2 SEP Abrams tank near Balad, Iraq. The latest incident was near Baghdad on Christmas Day 2005, when a 64th Armor Battalion M1A1 Abrams was destroyed by a very large mine. In order to counter these new battlefield threats, the US Army is developing the Tank Urban Survivability Kit (TUSK), which modifies the M1A2 SEP tank to enhance urban combat effectiveness.

As a result of recent experiences with urban combat, the IDF has developed an urban warfare protection kit for the Merkava Mk3. This kit provides an all-round add-on armor suit, including heavier bottom plate. This kit also includes: 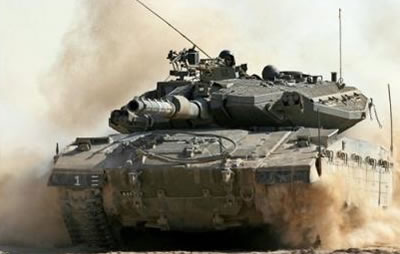 A different urban warfare kit developed for the Merkava Mk 4 includes a hull mounted ram, and an overhead, remotely controlled weapon station, which can be operated by the loader.

When modular armor upgrades are available, tanks can be modified to counter typical urban threats without reshaping their outer envelope. Otherwise, appliqué armor is used, adding additional passive (ceramic) layers to strengthen weak spots. This is much more effective, and tidier, than the addition of track blocks, sand bags, concrete blocks and chicken wire, as seen in the past. 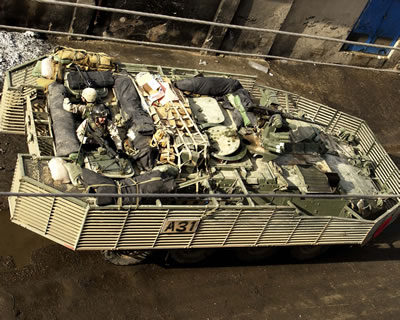 Slat cages have already proved to be highly effective on Strykers in Iraq, and are widely used there by the US, British, and Australian forces. The same concept is also used by the Israeli Army operating around Gaza for the protection of AIFVs, armored bulldozers, and heavy troop carriers.

Other upgrades in protection that are expected to be fielded within the next 12 to 24 months are various Active Protection Systems (APS). The Russians pioneered this technology with the development of Drozd and Arena-E “hard kill” systems, but western technologies seem even more promising.

Among the most mature of the APS systems are the Israeli Trophy and US FCLAS systems, which use focused fragmentation to neutralize incoming projectiles. The Active Defense Systems (ADS) from IBD, and similar Israeli systems, use focused blast effects to defeat similar threats. The latter are considered more suitable for urban warfare, as they can be employed safely near troops and innocent bystanders. Use of APS and/or ADS is considered imperative for all future combat vehicles, and these systems will be included in the design of all projected developments of manned armored vehicles, including FCS, FRES, EBRC, and future German and Israeli armored vehicles.