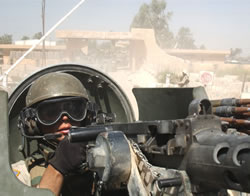 While tanks are relatively well protected against most common threats, their crews are only safe as long as they remain inside their vehicles. Since the coaxial machine gun has the same limited elevation and depression as the main armament, it is necessary to traverse the entire turret in order to aim at close-in targets and high elevation targets cannot be engaged at all in some situations. Consequently, use of external turret mounted machine guns and hand grenades by the commander and loader are frequently required for self-defense. Exposure of tank crewmen outside the armor of their vehicles provides firing opportunities that can be exploited by snipers. Effective for this type of situation include the use of overwatch and mutual coverage tactics. Obviously, the employment of under-armor remotely controlled weapon systems dramatically improves the effectiveness and survival expectancy of tank and APC crews.

Tanks are designed for fast-moving battle in open terrain, where their mobility, firepower, and survivability make them ideal weapons platforms for high intensity combat. Urban battlefields reduce the value of these attributes. If a tank cannot be operated properly in urban conditions, it can become a steel trap for its crew and a liability to the forces operating with it. Some of the limitations inherent in existing tank designs can be overcome by relatively simple modifications that enable improved survivability and enhanced application of urban combat tactics.

Urban modification kits developed for modern tanks also include video cameras for viewing ‘blind spots’ around the tank, especially at the flanks and rear. When a tank is maneuvering in close quarters, trying to avoid damage to the vehicle and its surroundings, guidance is absolutely essential but also exposes the guides to the risk of hostile fire. Voice control over radio has been tried as an alternative to a dismounted guide, but has proven to be less effective. A benefit of the new video system is that it enables the driver to reverse and turn without such external guidance. A 360 degree omni-directional panoramic video camera has been tested on the Merkava Mk4. These video systems are equipped with automatic motion detection capability to automatically detect and warn of approaching threats, or hostiles climbing onto vehicles when they are stationary.

Battle Management Systems (BMS) such as the net-centric US FBCB2, the Bowman Tank Digitization Program, implemented in the British Challenger II, SIT, installed in the French Leclerc or Israeli WIN BMS can dramatically improve the situational awareness of the tank commander, especially when “buttoned up” for maximum protection. BMS also enables firing at much closer ranges and with smaller safety margins. It improves the allocation of areas of responsibility, simplifies the establishment of compartmental sectors, and reduces cross fire and the risk of fratricide.