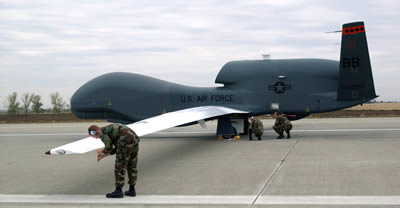 The largest platforms, such as Global Hawk, and other High Altitude Long Endurance (HALE) systems currently under development, are performing missions similar to Low Earth Orbit (LEO) satellites. Typical equipment used the multi-sensor package of Electro-Optical / Infra-Red (EO/IR) and SAR radar. As HALE systems fly at very high altitudes, the details provided by its EO/IR sensors are sufficient for general intelligence gathering, but for close-in investigation of time critical targets, a closer look is essential. High flying UAS can descend to lower altitude for a closer look, but this is commonly done with UAS flying at medium altitude. A significant advantage of UAS over satellites is their capability to loiter over a particular area, and cover a specific location for an extended time period. This usually requires changing the mission planning, or penetration of a closed airspace. Alternatively, the UAV can deploy an expendable sensor (mini UAV) which can descend and loiter at lower altitude over an area for an extended period. Fighter aircraft equipped with EOIR targeting pods or other UAV systems, (such as Predator) can be used to augment the HALE mission and seek specific targets spotted by a high flying Global Hawk.

Typical sensors deployed with HALE platforms perform best when rapidly covering a very large area. Such sensors could use line scanners or stepping cameras, in addition to Synthetic Aperture Radar (SAR) to cover as large an area as possible. While HALE platforms have large payload capacity and long endurance capability, they are designed to operate high in the stratosphere. At such altitude they fly “above the weather’ and by using multi-spectral sensors, including EO, NIR, IR, and SAR, can penetrate clouds, dust, or darkness to provide excellent intelligence and recce for the higher command echelons. However, the resolution overview provided by such platforms are rarely detailed enough to support direct engagement by tactical echelons, especially in low intensity urban terrain warfare. These missions require more detailed, more flexible and responsive ad-hoc imagery, which can be obtained by other means.