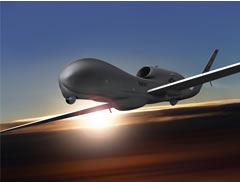 BAMS will supply the US Navy with persistent global intelligence, surveillance and reconnaissance system to protect the fleet and provide a capability to detect, track, classify and identify maritime, littoral and land targets. three companies are competing on this program. Teams are led by Northrop Grumman, Lockheed Martin and Boeing.

The Lockheed Martin teaming includes General Atomics, offering the Mariner Unmanned Aerial System (UAS) designed for operations at an altitude of 45,000 ft.. The proposed solution will augment a fleet of manned maritime surveillance platforms, such as the Lockheed martin P3C and future P-8A (MMA) aircraft. The platform proposed by the team is the Mariner, a high altitude derivative of the Predator B (Reaper) system, designed to operate as an all-weather, multi-mission altitude agile, persistent intelligence, surveillance and reconnaissance asset supporting naval operations. Mariner shares several systems with the Reaper, including major fuselage elements, avionics, flight controls and powerplant (both are using the Honeywell TPE-331-10GD turbo prop engine with 49 kVA power generator).

Northrop Grumman is offering the maritime derivative of the Global Hawk, designated RQ-4N for the BAMS program. According to Northrop Grumman, BAMS will benefit from a HALE platform, since the whole program could utilize only five orbits operating at a range of 2,000 nautical miles, or even three, operating at 3,000 nmi orbits, thus minimizing the operating bases required for the global mission with assured worldwide access to all mission areas, independent on local operating bases. The company claims that the HALE platform is better positioned to support ISR missions conducted over very large areas, since these platforms can support the highest rate of ‘target revisit’, in order to determine its status, location, heading and intentions.

Boeing is offering an optionally piloted platform for BAMS, based on a special mission Gulfstream G550 platform, currently in US Navy service. Boeing popposes to leverage the investments made in its P-8A Posedon to ensure a high degree of commonality between the manned and unmanned maritime surveillance platforms. Boeing’s BAMS team also includes Gulfstream, Raytheon, Rolls-Royce and Honeywell. In the BAMS configuration the unmanned G550 has a maximum takeoff weight of 95,000 lbs (43,250 kg). It will offer mission endurance of 16 hours, operational ceiling of 51,000 ft and top speed of 480 knots (440 kt. Cruise and 350 kt loiter). The aircraft will be fitted with an advanced digital radar system and EO/IR sensor, navigation radar, due regard optical system based in a conformal ‘gondola’ shaped bay, ESM sensors, common datalink and wideband satellite coms.

Operators in a combat/hazardous environment are often subjected to situations that test the limits of physical and cognitive abilities. Input devices for human-technology interaction therefore must be flexible, easy to use, and must reflect the potential need for common control of computer-based assets such as a robot or wearable computer.