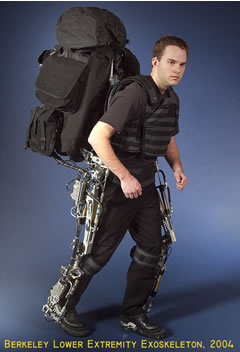 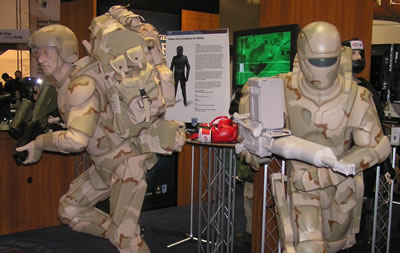 As the body armor is only part of the combat load carried by the infantryman, the military is seeking new concepts to offload some of the weight from the soldier. One way to overcome the weight barrier is offloading some of the cargo to load carrying vehicles – such as the SMSS, or robotic Mule.

DARPA dedicated several studies to improve human load carrying capability by introducing ‘wearable robots’, or ‘exoskeletons’, as well as robotic ‘pack mules’. Under the Biodynotics program, the BigDog project applied biological principles that animals use to move and crawl across different terrain types to develop a bioinspired robotic ‘pack mule’ that can carry 150 – 200 pounds over any terrain and under any conditions a human could tolerate. the vision is that BigDog would enhance warfighters capability by carrying supplies.

Another concept is the wearable robot of “Exoskeleton’, considered to become part of the future infantry combat system. Similar programs are aimed at people with disabilities and for artificial limbs and (prosthetics). Previously considered a futuristic dream, exoskeletons could become a reality much sooner, with pioneering technology demonstrators are already working and are expected to ‘walk out from labs’ by 2008. Among the developers engaged in research and development of wearable load carrying robots are Sarcos, the Japanese Cyberdyne and Berkley University.

In the future, warfighters tasked with long patrol missions will also be able to pack their loads on four-legged robots, such as the Boston Dynamics Big Dog, developed with DARPA funding. The current version of this ‘robotic pack mule’ uses hydraulically powered articulated legs designed with shock absorption mechanism, coordination and balancing, facilitating complex movement. The four legged robot measures 1 m’ long, 0.7 meters tall and weigh 75 kg. It already demonstrated negotiating rough terrain at a speed of 3.3 mph, climbing a 35 degree slope, carrying 120 lb loads. Big Dog is driven by a two-stroke single-cylinder petrol engine. The robot can follow a simple path on its own, or can be remotely controlled. (see video below) 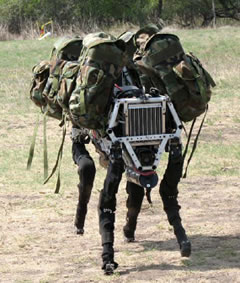