Panoramic Vision is becoming a common requirement for modern combat vehicles. A number of systems were displayed at the Modern Day Marine expo, most systems are based on an integration of video images provided from multiple staring cameras (CCDs) into a panoramic view of the vehicle’s surrounding. Panoramic vision systems are considered an essential element for perimeter protection and situational awareness. SA can be further enhanced with the addition of gunshot detection systems and remotely operated weapon stations (RWS) covered in a separate section of this report.

Multi-user Panoramic Synthetic Vision System (MPSVS) from EDO Corp offers 360 visual situational awareness for crew collaboration and threat engagement. The system uses multiple video cameras installed in a ring mount attached to the base of standard CROWS weapon stations. The system enables the crew to remain ‘buttoned up’ while being fully visually aware and engaged. The system provides 360 stereo 3D images in day and night, under all visibility conditions. A unique capability offered by the system is the use of video change detection for route clearance missions, where previously collected video streams ‘change detection’ algorithms are employed to past (recorded) and live feed, detecting suspicious objects along the route of march. MPSVS can be integrated with counter-sniper systems such as the Boomerang III, to facilitate effective sniper engagement. It also performs passive target designation, which can be use to direct the weapon station or remote weapons. The panoramic coverage enables the crew to constantly survey their perimeter, regardless of the weapon’s line of sight. They can track multiple targets simultaneously in queue for engagement by the weapon station. The system has an integral ‘combat playback’ capability, enabling review of critical events, allowing for the identification of suspicious elements in real-time or during debrief.

Another omni-panoramic vision system was displayed by ODF Optronics through their US representative Mistral. The system uses multiple cameras integrated in a bulky sensor pod installed on the vehicle’s roof. The system includes four to six cameras and a single, rotatable high resolution camera, which provides ‘close-up’ viewing of targets of interest. The capture of the omni-directional scene is performed simultaneously from all cameras, staring over a 360 deg. without the need to rotate an imaging device. The system, an evolution of the omni-panoramic mast-mounted camera introduced in 2004, enables multiple users to watch the vehicle’s surroundings simultaneously, each with a specific region of interest or allows for single user surrounding assessment. The rapid ‘stitching’ of pictures, performed in real time and on the move, require significant image processing. Pre-processing is performed on the sensor pole while the remaining is performed on the system’s ‘black box’ or operating computer, which can also be utilized for video motion detection, enabling perimeter protection for ‘silent guard’ mission, offer obstacle avoidance when driving or reversing in narrow urban terrain and offering ‘close-up’ views of specific areas of interest, regardless to where the vehicle or sight is pointing at. This camera is controlled by the operator, and is aimed at locations designated by the controller. Panoramic vision systems are currently considered for installation in various combat vehicles, including the MRAP. 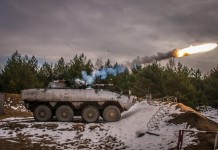