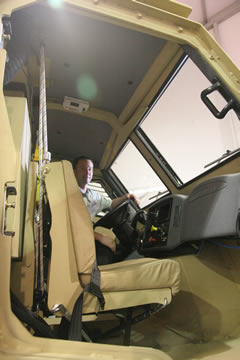 Blast protected seats are becoming a hot product among services tasked with Global War on Terror. Vehicle designers recognize the need to protect vehicles, passengers and crews not only from bullets, mines and IEDs, but also from the devastating blast-effects suffered by occupants during such attacks. Potential applications of such seats are in the new Mine Resistant Ambush Protected (MRAP) vehicles and future Joint Light Tactical Vehicle (JLTV), as well as for Strykers, M915, M113, HMMWVs and the new Expeditionary Fighting Vehicle (EFV) and FutureCombat System’s Manned ground Vehicle (MGV).

Another type of blast protected seat is produced by Plasan Sasa and installed in the MaxxPro MRAP vehicle produced by International. The troop seats are suspended from the roof and walls by elastic cables, retaining standard restraint harness for quick release and comfort, particularly when used by troops loaded with full combat gear.

Transparent armor has also become an issue, with the demand for improved situational awareness and vehicles are already designed with multiple, armored windows which, alas when required to maintain the same level of protection as opaque armor, must contribute to excessive vehicle weight.

At MDM and AUSA ArmorWorks demonstrated its latest version of transparent armor made of monolithic Polyurethane polymer, offering about 15% reduction in aerial density compared with blast fragmentation protected glass while offering another important advantage – unlike conventional armored glass, the transparent Polyurethane window does not shatter on impact and maintains optical clarity and high transparency even after multiple hits (characteristic of IED damage).

The new material is compatible with night vision goggles and is provided for airborne (helicopter windshield) and vehicular applications.