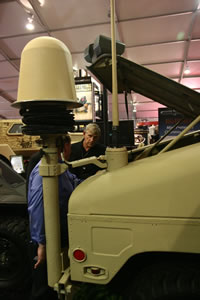 Counter IED systems and solutions were premier highlights at MDM 07 but, since most IED exhibits were excluded from the media, Defense Update cannot elaborate further on this important topic. Yet, several systems did make it through to the public eye. One of the most popular systems, deployed by the thousands in Iraq and Afghanistan is the CREW IED jammer. CREW is one of the counter-IED programs managed by the DOD’s Joint IED Defeat Organization (JIEDDO). This vehicle-mounted electronic-warfare jammer is designed to prevent activation of Radio-Controlled Improvised Explosive Devices (RCIED) by disrupting radio communications over frequencies commonly used with wireless control devices such as car alarms, garage doors and cellular phones. CREW systems are one element of the DoD’s Joint Counter RCIED Electronic Warfare program.

Over a thousand CREW systems of an earlier version are currently operating in theater. These systems were delivered last year by EFW, as part of a rapid fielding effort made by JIEDDO. At MDM 07 and AUSA 07 the company displayed the latest upgraded version of the system, offering more sophisticated programming and power management enabling efficient operation of collocated communications systems. The new system utilizes the same antenna payload and mast of current CREW systems.

As threats are constantly evolving, counter-IED systems are also undergoing continuous evolution through a continuously ‘spiralling’ process. The current version is the CREW 2.1, produced by EDO Corporation. In 2007 the company won four orders for a total delivery of over 8,500 units to be delivered by mid 2008. Currently deployed in Iraq, vehicle mounted CREW systems will eventually be fielded with each of the military services of the Central Command Area of Responsibility.

Countermeasures are only one facet of combating IEDs. An RG-33 MRAP displayed at MDM 07 demonstrated another step forward in the defeat of IEDs, based on the location, identification and disruption or initiation of the suspected object from a safe distance.

AAI introduced here an IED standoff detection system based on a lightweight, mobile ground-penetrating radar installed on a manned route-clearing pathfinder or robotic platform. The system can locate metallic objects hidden beneath the surface or at the roadside, these include mortar bombs or artillery shells rigged as IEDs. The radar can detect such objects at a significant distance ahead and around the vehicle (about 300 ft 100 meters)providing standoff safety and ample early warning for intervention by explosive ordnance disposal (EOD) neutralization elements.

The engagement of IED from a distance requires an integration of powerful electro-optical payloads and remotely operated weapon stations, Two systems were demonstrated here – an RG-33 MRAP based system utilizing an observation and surveillance mast produced by Gyrocam systems and BAE Systems’ Lemur remotely operated weapon station and a system integrating two of Elbit Systems products, a mast-mounted EO payload and the ILWS remotely operated turret, integrated on a counter-IED HMMWV technology demonstrator, which also employed a new version of teh CREW Counter-IED jammer.